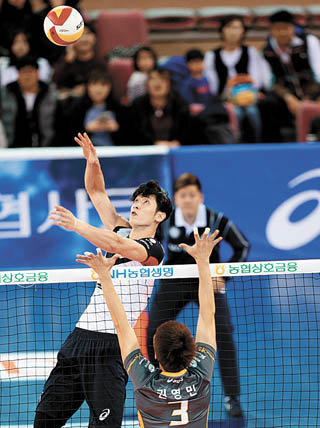 The 29-year-old achieved a “triple crown”, scoring three or more points in back attack, blocks and serve aces. On Tuesday, he had four points with a back row attack, three with blocks, and another three with serve aces.

For Moon, this was the third triple crown in his career and the first since March 1, 2011, against Samsung Fire Bluefangs. The latest Korean player to achieve the triple crown was Kwak Seung-suk of Korean Air Jumbos in March.

“I’m happy. It’s my first triple crown achievement in four years,” Moon said after the game. “My serve wasn’t good, but as I practice for accuracy and power, I’m now confident.”

With his good looks, Moon has been the star player of Korean volleyball. After playing for German club Vfb Friedrichshafen and Halkbank Ankara in Turkey, he returned to the V-League in 2010. However, injuries have been dragging him down.

He damaged his left knee anterior cruciate ligament during the 2013 World League against Japan which forced him off the court for six months. Coming back from injury, Moon planned a successful 2014/15 season, but couldn’t help his club who failed to reach the playoffs for the first time since V-League started in 2005.

After the miserable season, the Skywalkers appointed their former setter Choi Tae-woong as their new coach right after he decided to end his playing career in March. Since then, the 39-year-old has been trying to change the Skywalkers’ style with speedy volleyball, which emphasizes the stamina of players.

While some teams in the V-League have been playing a style of volleyball that relies heavily on their foreign players, the Skywalkers are trying to involve as many players as possible in the game.

As of Thursday, the Skywalkers - who have two V-League titles and four runner-up finishes - are third in the men’s division with six wins and four losses. The Skywalkers will play defending champions and league No. 1 OK Savings Bank Rush & Cash on Sunday to climb up in the standings.

In the Cheonan-based volleyball club’s revival, Moon is taking center along with Cuban attacker Oreol Camejo.

While foreign players are dominating the league’s scoring rankings, Moon has scored 169 points in 10 games, and ranks best among local players with the Stars’ Kim Yo-han. “Moon used to have a quick tempo attacking style,” said Lee Sang-yeol, an analyst for SBS Sports. “Under Choi’s speed volleyball, he has found his place.”

In addition, Moon’s defensive skills have improved. This season, coach Choi has moved Moon to right position, while Camejo takes the left, which alleviates defensive pressure on the Korean. In terms of digs - a defensive hit after opponent’s spike or attack - Moon is averaging 1.33 per set this season, better than last season’s 1.06. As for receive success rate, the 1.98-meter player is marking 48.99 percent, a big improvement from last season’s 23.62 percent.

Moon, who got married in April, shoulders a lot of responsibility as team captain.

After the team’s regular setter Noh Jae-wook was out due to an ankle injury last week, the Skywalkers have been playing with backup setter Lee Seung-won.

It has not been easy to build plays with Lee, but Moon says the situation is improving.

“I should have performed well to lessen pressure on Lee, but I’m sorry for him,” Moon said. “As we are developing plays with training, we will be better.”

Coach Choi knows that it’s not only Moon’s fault when he made errors in recent games.

Moon’s attack success rate is currently at 45.54 percent, but in a game against the Stars, he had only 34.37 percent.

“Since Lee tries to toss the ball in a hurry, there are shallow balls which makes it difficult for attackers to spike,” Choi said.

“Lee should be feel responsible, but so too should Moon. As I look at Moon caring about Lee, I think he has the captain’s responsibility.”