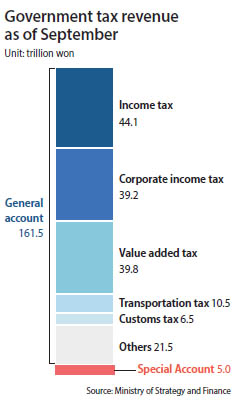 According to a report by the Ministry of Strategy and Finance on Thursday, total government revenue expanded, showing the government has reached 77.2 percent of its revenue target for this year, which also rose 6.7 percentage points from the same month last year.

“If the current tax collection trend continues, it is likely that the government could reach its target revenue by the end of the year,” said a director in charge of taxation analysis at the Finance Ministry.

Excluding funds, the government’s operational fiscal balance produced a 46.3 trillion won deficit, indicating the government is in the red.

“Because of expansionary fiscal policies, the total expenditures soared significantly, but this has made a great contribution to economic revival,” the ministry said in the report.