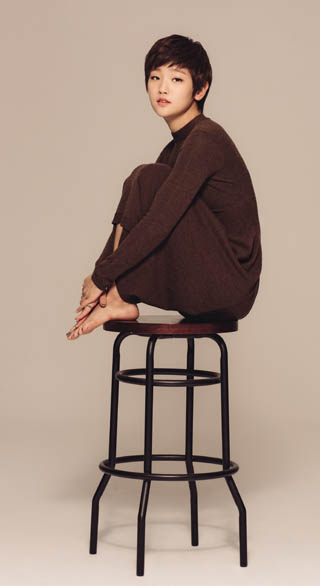 Few would have believed that actress Park So-dam’s baby face could be that of a demon.

In “The Priests,” a Korean horror film about exorcism, Park plays Yeong-sin, a teenage girl possessed by a demonic spirit.

The actress said humbly that she hopes her performance somehow helps the film, but most viewers would agree that she left a strong impression.

Today, Park is known as “the girl to watch” in the Korean film industry. Besides “The Priests,” she recently appeared in “Veteran” (2015) and “The Throne” (2015), two of the most talked-about films of the year.

After making her name known with “The Silenced” (2014), Park has been busy not just on the silver screen but also with a television gig. She is currently appearing in the cable television drama series “Because It’s First Time.”

The JoongAng Ilbo talked to the 24-year-old about her burgeoning career and more.

Q. There are so many positive reviews about your performance in “The Priests.” How do you feel?

A. I feel fortunate. The most memorable review I heard is how scary I looked. I guess it’s hard to evoke such a horror in people as a young actress. I also liked the review because it essentially helps the film.

You probably knew when you took on the role that if you did well, it would catapult you to stardom.

It’s true that I was ambitious. I also knew that it’s probably my last chance to play a teenage girl. But what was bigger than my ambition was my wish that my performance would somehow help the film.

Wasn’t there any pressure in playing a possessed girl?

There was because I didn’t want people to go, “What in the world is she doing?” I wanted to people to sympathize with Yeong-sin and feel her pain. I felt only when I did my part, the characters of two priests would also be convincing.

Your character is bedridden and there is a piece of cloth covering your eyes. It must have been difficult to deliver your emotions with your eyes covered.

That’s true. Whenever the director yelled “cut,” [co-actors] Kim Yun-seok and Gang Dong-won would check if I was alright. But it wasn’t that emotionally stressful. I never even had a nightmare - not for a night.

You also had to shave your head for the film.

Yes, because Yeong-sin had to be neither a female nor a male. I agreed with the director that to embody something that I’m not even sure what it is, I had to make myself an absolute blank slate.

I was also surprised to hear that the sounds Yeong-sin makes were not electronic sounds.

Yes, I think I used all the breathing and voice techniques I’ve ever learned for this film. My voice is naturally mid- to low-tone, and I have practiced a wide vocal range. An actor should deliver the lines accurately. Also depending on the voice, a character is formed.

You are often compared to actress Kim Go-eun. Have you ever thought, “What if I debuted first?”

Not really. We both studied acting at Korea National University of the Arts. She was a good friend and always motivated me. But I loved school so much. I’m actually the only one in my class who never took a break. I wanted to graduate and debut only when I was really ready. So I never really wonder what would’ve happened if I debuted first. I plan to act all my life anyway.

How can you be so sure that you’ll be doing this all your life?

Whenever I see veteran actors, I always imagine what I will be like when I’m their age. For me, it’s such an amazing thing to be a character whom I can portray with my face of the time. Acting for me is such a curious and enjoyable job. That’s why I feel I can continue doing it.