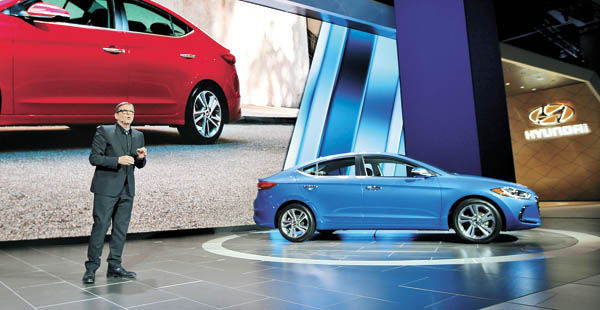 LOS ANGELES - Hyundai Motor and Kia Motors have unveiled two key models that will lead their sales in the United States, the world’s second-largest car market, next year.

During the media event at the 2015 Los Angeles Auto Show, which kicked off at the Los Angeles Convention Center in California on Wednesday, local time, Hyundai Motor unveiled the all-new 2017 Elantra compact sedan for the global market.

The automaker already rolled out the model in Korea in September under its local name, the Avante.

“The Elantra is the sixth-bestselling car in the world,” Hyundai Motor America CEO Dave Zuchowski said. “It is a vehicle which raises the bar in every single category over its highly successful predecessor. More than 10 million Elantras have been sold globally over the past 25 years and over two million units in the United States alone, where it is our bestselling model.”

The company said the Elantra will be offered in two trims to fit the characteristics of the U.S. market: a 2.0 CVVT engine that operates with a six-speed auto and manual transmission, and a 1.4 Turbo GDI engine with a seven-speed dual clutch transmission.

“Two weeks ago, Hyundai’s global leadership team led by Vice Chairman Chung Eui-sun announced the global launch of a separate Genesis luxury brand,” Zuchowski said. “It sets the stage for us to compete head-to-head against the world’s most esteemed luxury brands with products that extend well beyond today’s award-winning Equus and Genesis models.”

At the auto show, Hyundai displayed a total of 17 cars, including its Sonata sedan, Santa Fe SUV and environmentally-friendly Sonata plug-in hybrid.

Hyundai’s sister company, Kia Motors, also took a part in the show, using the platform to debut its new Sportage SUV as part of its efforts to meet the demand for larger vehicles in the United States. The company started selling the SUV in Korea in September and said consumers in the North America region will be able to meet the fourth-generation Sportage early next year. The company said it will carry out a series of marketing programs in the United States, where sales of SUVs are predicted to increase by 12 percent by the end of the year compared to 2014, according to Hyundai Motor America.

Kia displayed a total of 30 cars, including the Sportage and K9, K7 and K5 sedans. The auto show runs until Nov. 29 after finishing a three-day media event, and about 800 cars will be displayed with 125 exhibitors on the show floor.