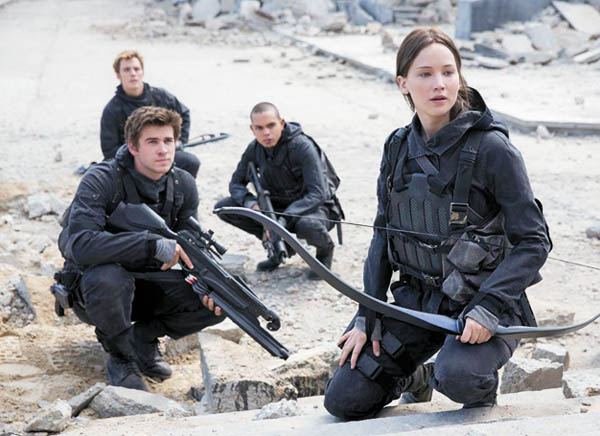 After a year-long wait since the first part, “Mockingjay, Part 2” presents at last the final showdown between Katniss Everdeen (Jennifer Lawrence), Panem’s heroine and the Girl on Fire, and President Snow (Donald Sutherland), Panem’s ruthless and tyrannical ruler.

Viewers will finally witness how the revolutionary war unfolds while saying farewell to this highly acclaimed series.

Along with the morally questionable rebellion leader President Coin (Julianne Moore), fellow Tribute victors and other rebels like Gale (Liam Hemsworth), Katniss prepares to take over the Capital once and for all. Though the rebellion has grown stronger by recruiting more rebels from and taking over other districts, the stakes are still high: as seen at the end of Part 1, her friend-fiance-fellow-warrior Peeta Mellark (Josh Hutcherson) attempts to kill Katniss after being captured, brainwashed and released back to the rebels.

Katniss has to keep her close friend at a distance while the cure for the brainwashing remains uncertain.

Meanwhile, the unity of the rebellion become unstable as the districts starting turning on one another.

And, as the so-called safe zones turn out to be a myth, the grand march from District 13 to the Capital poses a whole new set of dangers.

A series of unfortunate events unfold for Si-wan (Shin Yeon-woo), who is left to fend for himself after his mother, who devotedly attended church to pray for a cure for Si-wan’s brother’s illness, commits suicide.

His father, who had remained distant, abandons the family.

Grieving and left alone, Si-wan resolves that the church is to blame.

As such, he goes to a small internet cafe, where he finds the church’s minister (Kim Ho-won). Despite Si-won’s initial plan to avenge his mother, he falters. Rather, he starts to develop an affinity for the minister as well as Jin-sook (Kim Young-sun), the internet cafe owner and a churchgoer like his mother, and Jin-sook’s daughter.

The four bond and in a way become a new family that Si-won needed after all.

Fate puts Si-won’s faith to the test, and his way of resolving the crisis, along with his will to help his new family, serves as a testament to his growth and resilience.

What’s the Time in Your

Safi Yazdanian, a critic and documentary filmmaker, makes his feature debut with “What’s the Time in Your World?”

A film about homecoming and rekindling past friendships, the movie presents several layers of love - not just about the love between man and woman, but also love for country and the preciousness of memory.

Iranian actress Leila Hatami, who starred in the Academy Award-winning drama “A Separation” (2012), plays the leading role of Goli.

After living in France for the past 20 years, Goli decides to take a spontaneous trip to her hometown, Rasht, of which she has little recollection.

Waiting in Racht is Farhad - played Ali Mosaffa, the film’s producer and Hatami’s spouse in real life- who claims to be an old classmate of Goli’s but whom she doesn’t recognize at all.

In love with Goli, Farhad has to be patient while helping her regain her memories by arranging many meetings with other townspeople and friends to exchange stories.

Through this process, their friendship blossoms, independent of their past history, along with a renewed love and understanding of home.

Based on the popular webtoon of the same name by Yoon Tae-ho, this Korean crime drama delves into societal corruption, as represented by the convergence and clash of media, chaebol, politics and gangsters.

Internationally known actor Lee Byung-hun plays the role of Ahn Sang-gu, a political henchman who does the dirty work for lawmaker Jang Pil-woo.

Jang makes a secret deal with the biggest sponsor of a widely read conservative newspaper.

As such, Lee Gang-hee (Baek Yoon-sik), an editor at the paper, helps Jang rise to fame and become the leading candidate for president.

One day Sang-gu gets caught while snooping for his boss and is punished severely.

As a result, Gang-hee and Pil-woo immediately cut ties with him, leaving him all alone and seething with desire for revenge.

Enter Woo Jang-hoon (Cho Seung-woo), a prosecutor who throws himself into this situation as a chance to advance his career.

While investigating the case, Woo crosses paths with Ahn, who switches his allegiance.

In this battle of greed, vengeance, trickery and power, who will reign supreme?

“Monster Hunt” became the highest grossing film of all time in China upon its national release in July.

A feature that marks the directorial debut of Raman Hui, the Hong Kong-born animator and designer who was involved in creating the “Shrek” franchise, this new partly animated fantasy-comedy presents a whole new world where humans and monsters co-exist not so harmoniously.

“Monster Hunt” is set in a mythic medieval world in which humans and monsters, after years of battles and wars, finally agreed on a truce to live in separate realms.

This truce, however, is disrupted when a civil war breaks out in the monsters’ realm, forcing the pregnant Monster Queen to flee to the humans’ land.

The queen encounters a man named Tian Yin (Jing Boran) and, in order to save her baby before she dies, “transfers” the baby to him - a peculiar yet innovative gender-bending plot twist.

And so Yin gives birth to Huba, a cute human-monster hybrid who has radish-like white body and fuzzy green hair.

At first he wants to get rid of the baby by selling him to a pawn-shop owner.

However, as Yin becomes fond of Huba, he resolves to protect the last monster prince.

“Old Bicycle” tells the story of an unlikely bond between an elderly man and the grandson he hadn’t known before.

Based on the play of the same name by Lee Man-hee, who also wrote the original story of the critically acclaimed Korean film “The Way Home” (2002), the film depicts the bond of a grandfather and a grandson despite the generational and cultural gaps between them.

Actor Choi Jong-won plays the role of Kang-man, a grouchy senior who relies on alcohol and an old rusty bicycle for companionship.

One day, a social worker arrives at the rural village where Kang-man resides to deliver the news that Kang-man’s son, who had deserted him many years ago, died in an accident.

But because of Poong-ja’s stubbornness and explosive tantrums, it doesn’t take long before Kang-man gives up and reluctantly takes Poong-ja home.

Despite their differences, spending time together allows the two to reconcile and learn what it means to be a family.