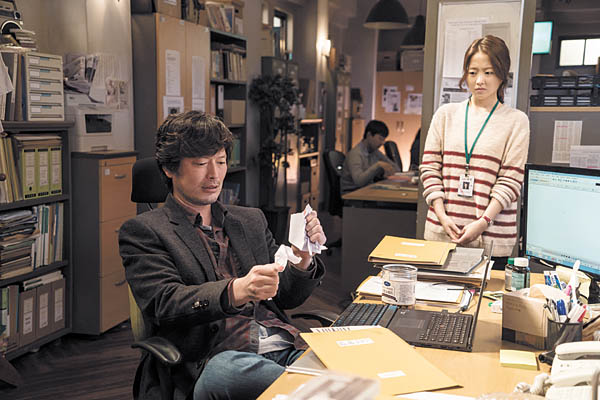 In the upcoming film “You Call it Passion,” Park Bo-young, right, plays the rookie entertainment reporter Ra-hee, striving to overcome several obstacles at work, including her fanatical boss, played by Jung Jae-young, left. [NEXT ENTERTAINMENT WORLD]

In contemporary Korean society in which the youth unemployment rate is rising like there’s no end, the newly coined term “yeoljeong pay” has emerged.

With yeoljeong meaning passion in Korean, this cynical term indicates a situation in which employers take advantage of the desperate but highly passionate youth by underpaying them or not paying them at all.

So when the upcoming film “You Call it Passion” was announced, starring Korea’s sweetheart Park Bo-young as a newbie entertainment reporter and veteran actor Jung Jae-young as her boss, many people expected that the film would console their scarred souls. But unfortunately, it didn’t work this way.

In fact, it would have been better to market the film as a fairly accurate look inside the entertainment business, where nabbing an exclusive interview and getting the scoop is the only way to survive.

Unlike the immensely popular office drama “Misaeng” from earlier this year, “You Call it Passion” is too centered on the showbiz world, which isn’t much like the world of ordinary office workers.

The story starts by showing the passionate young girl Ra-hee (Park) studying furiously to become a respected journalist. But after flailing at a series of interviews with major newspaper companies, she gets hired at a third-rate showbiz newspaper. While she is on probation, which is mandatory for beginner journalists, she is paid less than minimum wage, has little time to herself and doesn’t receive any acknowledgement for doing a good job.

But like Ha Jae-kwan yells at Ra-hee and all the other “yeoljeong pays” out there, “You can do anything if you just have passion. Right?”

Up until now, the bickering duo - the boss barking and Ra-hee whimpering - is pretty hilarious.

However, as the midway through the film, it starts to lose its comedic edge and ambition of consoling those who are in similar situations as Ra-hee.

Instead, the story takes a strange turn when Ra-hee gets a big scoop about one of the hottest actors and starts to feel guilty about it. As she gets to know more about that actor and how his agency is manipulating him to make money, her inner conflict intensifies, as she wavers between being a righteous reporter and surviving at her job.

And the story goes on, not straying an inch from the expected scenario. But some interesting sidekicks make appearances, including Oh Dal-su and Ryu Deok-hwan.

The film is based on the eponymous 2012 novel by Lee Hye-rin. It opens nationwide on Wednesday.