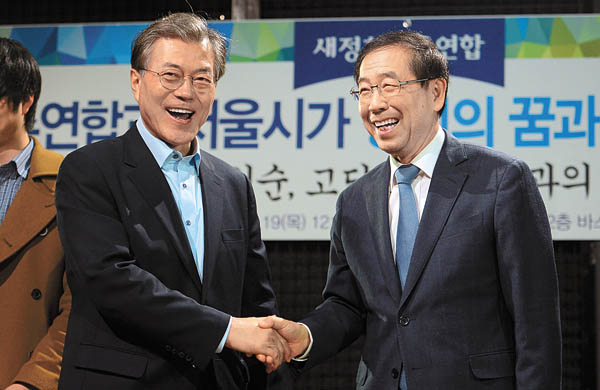 Seoul Mayor Park Won-soon agreed on Thursday to form an alliance with the embattled head of the main opposition party, Moon Jae-in, adding momentum to Moon’s proposal for a troika to lead the party ahead of the April general election.

Moon, the chairman of the New Politics Alliance for Democracy (NPAD), proposed an alliance on Wednesday with Mayor Park and Rep. Ahn Cheol-soo in a lecture at the Chosun University in Gwangju. All three are potential presidential contenders for the NPAD.

“I am willing to share the role of party chairman with the two,” Moon said. “We can create a joint campaign committee, work together to create election pledges and recruit candidates.”

The next day, Moon sat down with Park for 40 minutes to discuss his proposal and announced their alliance in a joint statement at Seoul City Hall.

“We agreed that we must give up our established rights and devote ourselves to reform the party and promote its unity,” the statement said. “Mayor Park agreed to the intent of Moon’s proposal. He will seek ways to cooperate, taking into account that he is also mayor of Seoul.”

“Moon and Park agreed that Ahn’s participation in the troika is crucial,” said Rep. Park Kwang-on, Moon’s chief of staff. “They agreed to help each other [persuade Ahn].”

In the joint statement, Moon and Park said, “We agreed that it is important for the party to implement the reform plan proposed by Rep. Ahn.”

In October, software-tycoon-turned-politician Ahn announced his own reform vision, in which he demanded that the “obsolete” liberal politicians retire from the NPAD, considered a direct attack on Moon’s allies. Moon has been tight-lipped about that demand despite Ahn’s repeated request for a response.

On Wednesday, Moon tried to placate Ahn. “There is no question that Ahn’s reform proposal is right,” Moon said in his lecture in Gwangju.

On Thursday, Moon and Park said in their statement that it is important for the party to implement Ahn’s plan. Since his election to the chairmanship in February, Moon has faced growing criticisms from inside the NPAD. His initiative to rewrite the party’s nomination rules produced a lot of disgruntlement, while the NPAD’s crushing defeat in October by-elections added pressure on him to step down.

In a move to overcome his crisis of leadership, Moon proposed that Park and Ahn share responsibility.

The three politicians are considered the top NPAD presidential hopefuls. Moon himself ran against President Park Geun-hye in the 2012 presidential race and lost.

Ahn also tried running for the presidency in 2012, competing against Moon for liberal votes. Moon continually outmaneuvered him, and he bitterly dropped out of the race a month before the election. He became a lawmaker in 2013 by winning a by-election as an independent and later joined the NPAD.

From March to July 2014, the party was jointly led by Ahn and Kim Han-gill, a senior lawmaker.

Park, a lawyer and civic activist, was elected mayor of Seoul in a by-election in October 2011. He won the election as an independent. Park later joined the NPAD and was re-elected in July 2014.

While Moon’s proposal for a troika gained momentum, it remains to be seen whether Ahn will go along. After Moon floated the idea on Wednesday, Ahn remained lukewarm.

Ahn’s aides told local media that he will probably announce a decision early next week.

“Moon didn’t even ask us [Supreme Council members], and we were elected by party members,” Rep. Joo Seong-yong said.