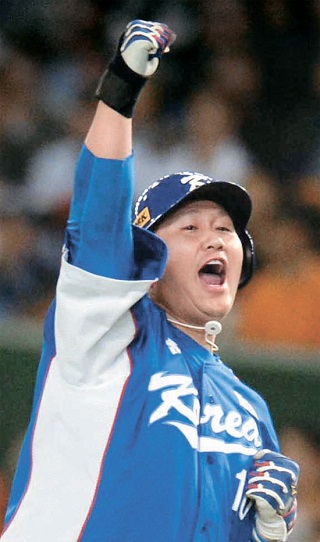 Korea’s Lee Dae-ho celebrates after hitting two-run single in the ninth inning in the Premier 12 baseball tournament semifinal against Japan at Tokyo Dome in Tokyo on Thursday. [NEWSIS]

Korea staged a dramatic comeback to beat Japan 4-3 by scoring four runs in the ninth inning at the Premier 12 semifinals in Tokyo on Thursday.

At the Tokyo Dome, cleanup Lee Dae-ho delivered a go-ahead two-run single to left when the bases were loaded in the ninth and led Korea to reach the final of the inaugural baseball tournament.

It was also a sweet revenge for Koreans who suffered 5-0 defeat to Japan in the opener of the World Baseball Confederation tournament on Nov. 8.

Clinching a victory from a 3-0 deficit, Korea will face the winner between the United States and Mexico on 7 p.m. Saturday at Tokyo Dome in the final.

“We got the result we wanted because we never gave up,” said Korean manager Kim In-sik. “I could tell the players wanted to win this one.”

While giving up three runs in the fourth, Korea struggled to find offense against Japan’s starter Shohei Otani who struck 11 batters and gave up only one hit and a walk over seven innings.


However, Korea’s rally started from the ninth with two straight pinch hitters, Oh Jae-won and Son Ah-seop, hitting back-to-back singles from relief Takahiro Norimoto. Jeong Keun-woo then delivered a double to left for Korea’s first run of the game.


Norimoto then hit Lee Yong-kyu to load the bases with nobody out.


Japan put Yuki Matsui to cool down the situation, but instead, he gave a walk to Kim Hyun-soo and made a score 3-2.