McDonald’s opens its kitchens to customers

McDonald’s opens its kitchens to customers 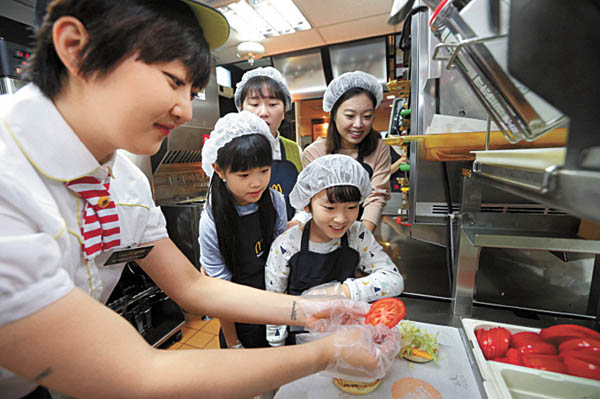 A group of Korean reporters clad in sanitary hats and aprons had a rare glimpse into the kitchen of one of McDonald’s Seoul branches on Friday. The multinational food chain wanted to show its kitchens to the public as the company celebrated the third National Open Day in Korea.

The tour at the Gwanhun branch in the tourist area of Jongno District, central Seoul, started in the storage area, where non-refrigerated ingredients lay in boxes with sell-by dates written on them. The ingredients are used on a first-in-first-out basis to make sure everything is fresh. Then, the staff had to wash their hands before proceeding to the cooking areas.

“All staff members must wash their hands every 30 minutes with at least 20 seconds of rubbing soap on them,” said Kim Young-ah, a manager of the Gwanhun branch.

Noticing some skepticism on the reporters’ faces, she continued, “If it’s hard to count out a full 20 seconds, we tell them to keep rubbing until they finish singing ‘Happy Birthday to You’ in their heads.”

McDonald’s uses timers that ring when too much time has passed after a burger patty is cooked. It uses 3M’s oil monitoring system to check on the freshness of deep-frying oil. Water used for beverages are filtered five times before use, and for ice, six times. The filter itself is changed and inspected regularly.

This year’s event comes after a report on Food Sanitation Act violations by major fast food companies from the Ministry of Food and Drug Safety that said there were 99 cases of alien substances added to food in the stores. Up to 300 violations were reported in accumulated data from 2011 to June 2015. McDonald’s was one of the restaurants cited in the report.

The event runs through today, and the company expects 5,000 people to participate. Every branch of McDonald’s in Korea is opening up their kitchen and showing guests storage rooms, refrigerators, patty grilling and nugget frying. Guests are even offered some freshly cooked food.

According to a senior communications manager, Hur Yoon-hee, the event was inspired by its “Surprised Mom” campaign. The campaign provided a video clip that showed how the ingredients used in Big Macs are no different from those used while cooking at home. Then, someone from the company asked, “Why don’t we just show people our kitchen?” and a tradition was born.

Anyone above the age of 8 can apply for the tours at any McDonald’s branch.

McDonald’s four promises to its customers are quality, service, cleanliness and value.