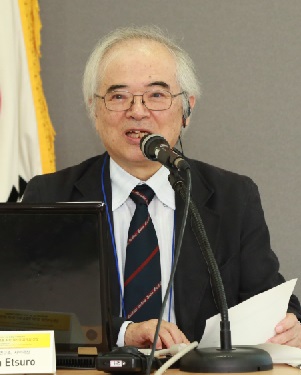 Japanese human rights lawyer Etsuro Totsuka said that despite the rhetoric at a summit between the leaders of Korea and Japan earlier this month, resolving the issue of the Japanese military’s wartime sexual slavery is not likely to come soon.

“[Prime Minister Shinzo] Abe is a hardliner on the comfort women issue, but he must not only satisfy the Korean people but the United States,” said Totsuka, director general of the International Human Rights Policy Research Institute, in an interview with the Korea JoongAng Daily on Tuesday on the sidelines of an international forum hosted by the Northeast Asian History Foundation in central Seoul. “The reason why Mr. Abe is still promising they will speed up negotiations could be his willingness to satisfy the U.S. government.”

Totsuka was among a group of two dozen legal and historical experts from China, Japan and Korea who took part in the one-day “International Conference on Historical Challenges and Prospects for Resolving the Japanese Military ‘Comfort Women’ Issue.”

The goal is to improve trilateral security cooperation between Seoul, Tokyo and Washington. “The United States knows that without settling this issue,” Totsuka said, “this may be very difficult.”

He emphasized the importance of timing, adding that “the Korean side missed the best opportunity” when Japan had a liberal government under Prime Minister Yukio Hatoyama of Democratic Party in 2009 compared to the current conservative administrations.

Totsuka was involved in raising the wartime sexual slavery issue for the first time at the United Nations in 1992.

“We had good timing when we made an intervention on the comfort women issue in 1992 at the UN, which was after both North and South Korea joined the United Nations,” he said. Both countries were admitted to the United Nations in September 1991. “Without them, what we have now would not have been possible.” Kim Hak-sun was the first Korean comfort women victim to make a public testimony in 1991 which enabled the United Nations and the international community to become more aware of the issue.

To bring any closure to the comfort women issue, he added, “the most important thing is sincerity. I think in every country, it’s the same, but in particular, Koreans are sensitive about sincerity, both in an apology and the process of negotiations. When there is a sincere apology, the victims will pardon the perpetrators.”

On why there is so much difficulty resolving the issue, Totsuka said during his keynote address at the conference that Japanese officials “stuck to an unreasonable rule that the government will no longer deal with the compensation issue, and the fact that this has become crippling to the resolution of this issue has become recently recognized. However, this kind of principle is not the law and is not something that breeches political regulations, so if there is a high-level political decision, it can lead to a measure to make an exception.”

During the three-session conference, Chinese experts also said that contrary to Japanese Prime Minister Shinzo Abe’s claims that there is no evidence of the Japanese government’s involvement in the forced recruitment of women into sexual slavery, there is new evidence being uncovered.

He continued, “These records have provided new evidence to resolve the ‘comfort women’ issue.”

Kim Ho-sup, president of the foundation, said in his opening remarks at the conference, “Our foundation as a research institute on Northeast Asia hosted successfully in 2010 the 100th anniversary of the Japanese colonization of Korea. And as a follow-up, over the past five years, the foundation has played a leading role in hosting international conferences to try to find the essence of the Korea-Japan historical tensions and how to try to resolve this issue, especially shedding light on re-examining the Korea-Japan treaty to normalize bilateral relations on its 50th anniversary in 2015.”