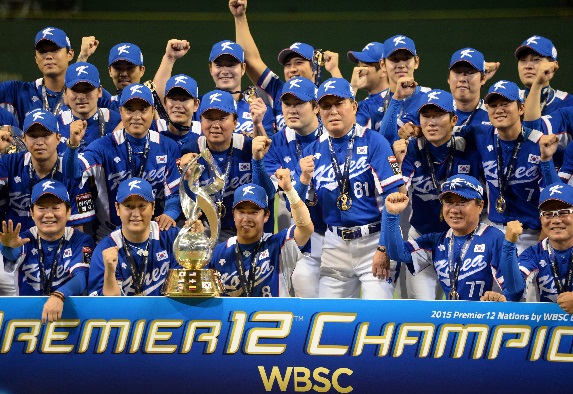 Korean players celebrate after beating the United States 8-0 in the Premier 12 baseball tournament final at Tokyo Dome in Tokyo on Saturday. [NEWSIS]

Korea became champions of the Premier 12 baseball tournament in Tokyo on Saturday after an 8-0 victory over the United States.

At the Tokyo Dome, Korea scored five runs in the fourth inning, powered by would-be major leaguer Park Byung-ho, who hit a three-run home run, and starter Kim Kwang-hyun who shut out Americans in five innings for Korea to become the first champion of the World Baseball Softball Confederation competition.

This is Korea’s first international tournament championship after the country won the gold medal in the 2008 Beijing Summer Games. It was also sweet revenge for Korea who lost 3-2 in the tournament’s qualifying round on Nov. 14.

“Since the United States was strong in the qualifying round, we had to be more focused,” Korean manager Kim In-sik said. “Players performed well beyond by expectations.”

Coming off from a dramatic 4-3 victory over Japan in the semi-final on Thursday, Korean players had an easy start. Leadoff Jeong Keun-woo hit a single in the first inning and later stole second. He later scored the games’ first run with a double by Lee Yong-kyu to right-center.

In the top third, Lee Yong-kyu drew a walk, and Kim Hyun-soo sent a double to deep right-center for Korea to make the score 2-0 and pulled U.S. starter Zack Segovia from the mound.

In the fourth, Kim Hyun-soo hit another double from American relief Brooks Pounders when the bases were loaded and doubled Korea’s lead to 4-0.

With two players still on board, Park Byung-ho, who is negotiating with Minnesota Twins after getting posted, blasted a home run to left field to give Korea a 7-0 lead.

Korea later scored thier final run in the top of the ninth when Jeong Keun-woo drew a bases-loaded walk off Casey Coleman.

Japan took third place in the tournament after beating Mexico 11-1.