MVP award is icing on the championship cake

MVP award is icing on the championship cake 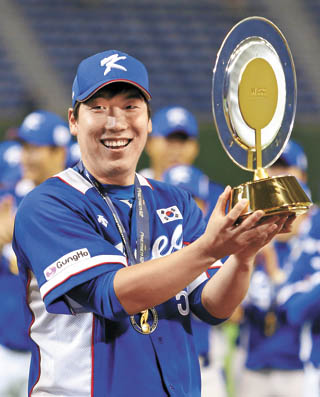 Korea’s Kim Hyun-soo holds the Premier 12 MVP trophy during the award ceremony at Tokyo Dome in Tokyo on Saturday. [AP/NEWSIS]

Korean outfielder Kim Hyun-soo has good reason for a double celebration - on top of Korea winning the Premier 12 challenge, he was chosen as the tournament MVP.

Before the championship in Tokyo, the 27-year-old played a big part in the Doosan Bears winning the 2015 Korean Series championship in the Korea Baseball Organization (KBO) earlier this month. He is now hoping his successes will pave the way for a position in Major League Baseball.

“I didn’t expect that I would win the MVP,” he said. “I thought Lee Dae-ho would win the award because if he didn’t make a hit, we would not be even in the final.”

Kim, who has been playing with Doosan Bears since 2006, filed for free agency on Saturday after his stellar performance in the Premier 12. Now fans are watching which team he will play for next season.

During the Premier 12, Kim, nicknamed the “Hitting Machine” for his batting ability, has been telling local reporters not to speculate about his next destination as he wants to focus on the inaugural tournament of the World Baseball Softball Confederation (WBSC).

But after capturing the championship and the MVP trophy, Kim said he would keep his options open, and MLB is possible if conditions are right.

“I will have to talk to my agent, but there’s no reason for me to turn down interest from major league clubs,” he said after the final on Saturday. “The major league is where I really want to play.”

Under the KBO’s free agent rule, Kim will have to negotiate with the Bears until this Saturday and if the two sides can’t come to an agreement, Kim then can begin talks with any other club in the KBO or overseas starting Nov. 29.

Bears President Kim Seung-young has already said they don’t want to let go of Kim, who had a .326 batting average, 28 home runs and 121 RBIs in 141 games this year. It is expected the Bears will raise the stakes on a new offer that will be better than SK Wyverns Choi Jeong, who signed four-year contract valued at 8.6 billion won last year, the most expensive deal among field players so far.