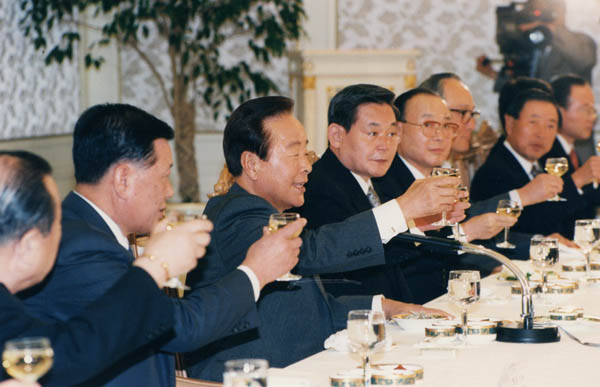 The business community paid its respects to late president Kim Young-sam on Sunday, for his significant contributions in lifting the Korean economy to a higher level in the 1990s by pushing aggressive reforms.

The Federation of Korean Industries (FKI), the largest business lobbying organization, on Sunday expressed its sadness at the loss of Kim and sent its heartfelt regards to the family.

It especially noted the substantial economic contribution the late president has made.

“The late President Kim Young-sam contributed in abolishing corruption and making society more transparent by adopting the ‘real-name financial system’ and the system of disclosing the personal holdings of all public officials,” the statement noted. 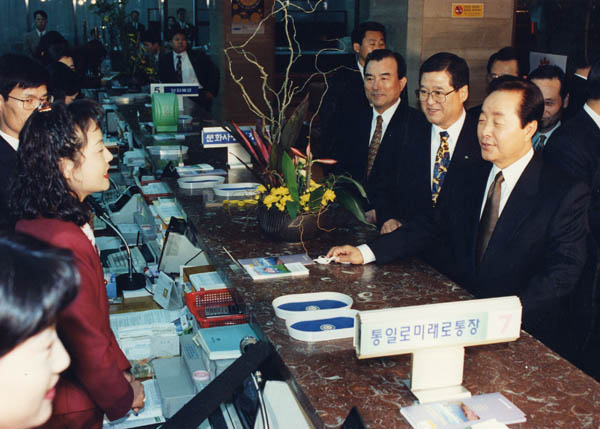 Late President Kim Young-sam at Commercial Bank of Korea on Nov. 29, 1995 to check his own bank account that he opened up in 1993 to demonstrate the practice of real name financial transaction system that was aimed at rooting out corruption. [JOONGANG ILBO]

“He also helped raise Korea’s status in the international community as well as help the Korean public gain pride by joining the Organization for Economic Cooperation and Development (OECD), which is a group of advanced economies.”

The FKI went on to add that it will do its best to help the Korean economy leap forward while paying tribute to the achievements that Kim left, which was aimed at raising Korea into a transparent advanced country.

The Korea Employers Federation showed its grief in its statement and urged the business community to praise Kim’s economic achievements and keep trying to retain economic growth. 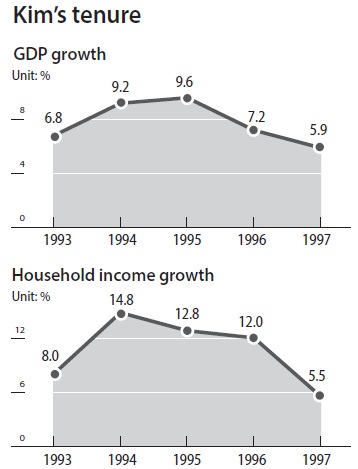 The Korea Federation of SMEs, the biggest organization for small and medium-size companies, highlighted Kim’s support for small business entities.

“Former President Kim established a new way of helping small businesses by creating the Small & Medium Business Administration and enacting the ‘venture business act,’” the federation said in its statement.

“Kim also expanded the Ministry of Information and Communication [the former version of the current Korea Communications Commission], leading digitalization of the country.”

The Association of High Potential Enterprises of Korea praised the late president’s contributions to expand the economy and increase efficiency of the market economy system, but pointed out a grave fault.

“However, it is unfortunate that he has left inerasable pain with the general public by triggering a bailout crisis,” the association said.

As the statements from the business community showed, Kim has bequeathed both success and failure among some in the country’s economic development.

Although Kim is mocked as the “IMF president” who couldn’t prevent the country from getting a bailout from the International Monetary Fund in 1997, it is true that the Korean economy showed rapid growth for the five years of his term.

According to data from the Bank of Korea, the country’s GDP recorded 6.8 percent in 1993 when he was inaugurated as president. GDP growth hit nearly 9 percent in the next two years. 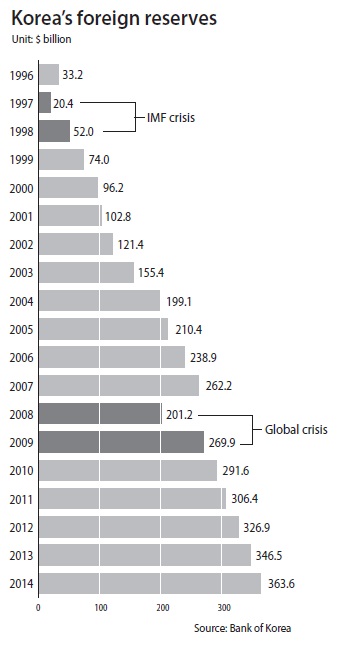 As soon as he took office, Kim announced a 100-day plan for a new economy to boost the domestic market. Kim revised regulations to help encourage entrepreneurs to start businesses, procure funds and enter the market.

The president expanded the regulation to the real estate market two years later to root out creating slush funds under borrowed names. Today the act on real name financial transactions and confidentiality serves as a strong regulation for the financial industry.

In 1996, Korea joined the OECD, accelerating economic exchange with the world.

Despite those achievements, Kim is branded as “incapable” or “IMF President” by detractors for not being able to manage the country’s foreign exchange reserves.

Coincidentally, Kim passed away on the same date he announced the IMF bailout crisis 18 years ago.

It turned out that joining the OECD was too early for the Korean economy at the time, because it wasn’t robust enough to endure rapid capital inflows and outflows.

In early 1997, a series of large business bankruptcies occurred sparked by that of Hanbo Steel, a subsidiary of the 14th largest conglomerate back then. The total debt of bankrupted companies in 1997 exceeded 30 trillion won ($25.9 billion), which served as the main cause for a credit crunch in the financial market. The country’s foreign exchange reserves plunged to nearly $20 billion by the end of that year.

“It is highly praiseworthy that the late president made aggressive regulatory reforms and measures to boost the market to reach high economic growth,” said Kim Jung-sik, economics professor at Yonsei University.

“However, early opening of the economy had adverse effects such as the aggravated current account balance, which gives us a lesson for the future economy.”