As one singing show declines, another rises

As one singing show declines, another rises 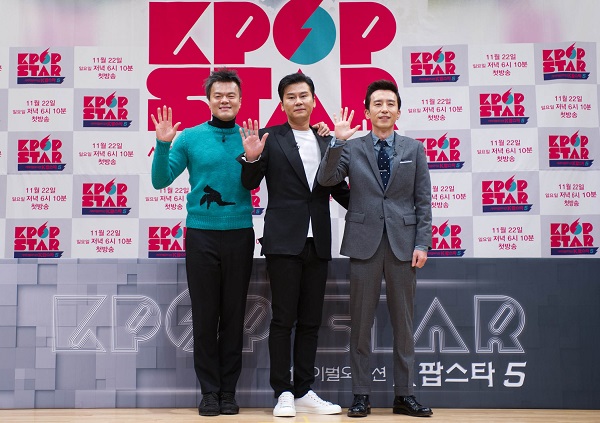 Three judges for the fifth season of the TV audition show “K-Pop Star” pose for a photo shoot on Tuesday. [ILGAN SPORTS]

Once TV audition shows were omnipresent. All broadcasters, from major networks to cable channels, launched their own shows, prompted by the huge success of the first season of “Superstar K,” which began in 2009 on cable channel Mnet.

Despite some controversy over the show’s similarity to the U.S. TV show “American Idol,” the very first audition show was a threat to major broadcasters.

After each episode, songs recorded by show participants made it onto the top 10 most-streamed music charts at major online music portals. The songs were heard everywhere. 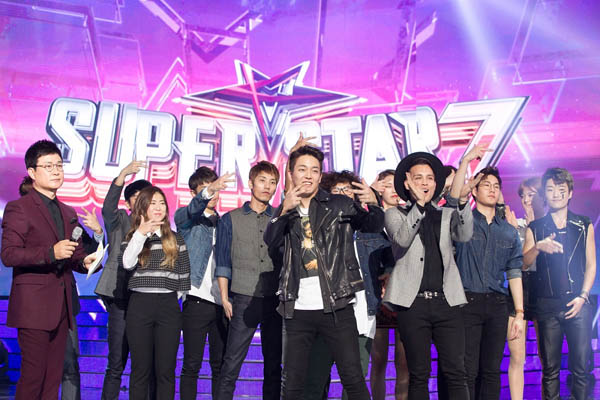 The seventh season of “Superstar K,” an original TV audition show, came to an end last week with viewership of less than 1 percent. [MNET]

But TV audition shows have been going downhill for the past few years.

Over the past seven years, only two TV audition shows have survived the harsh competition: “Superstar K,” which finished its seventh season on Thursday, and SBS’s “K-Pop Star,” which aired the first episode of the fifth season on Sunday.

Since its first episode on Aug. 20, the seventh season of “Superstar K” has drawn lukewarm response from viewers. To make matters worse, recent claims made by a participant seem to indicate that the program has strayed from its original mission.

Shin Ye-young, one of the participants for the seventh season of “Superstar K,” uploaded a post onto her Facebook account on Nov. 8, revealing that much of the show is manipulated by staff members.

According to Shin, a college student studying music, she didn’t apply for the show but the production team started asking her to appear on the show two years ago.

Such claims have been made by other participants in previous seasons, too. But Mnet refuted Shin’s claim by saying that the production team suggests that some music students or aspiring singers appear on the show.

In addition, Shin said she was a victim of “vicious editing.”

“Superstar K” is notorious for so-called vicious editing, as it cuts out some parts on purpose to make the show even more dramatic and provocative.

In order to add more drama to the competition between Shin and another female participant, Cheon Dan-bi, who made it to the final round, Shin said many of her comments were woven together to make a story.

“Sometimes I didn’t feel like doing an interview, but the staff members hid microphones and approached me to make me talk,” she wrote. “And later they used my comments for the show.”

This is not the first time “Superstar K” has been embroiled in such a scandal.

Yery Band, one of the participants in the third season, left in the middle of the show in 2011, citing the manipulative editing, while Brad Moore, a member of Busker Busker, who was also on the third season, said during an interview with an overseas news agency that everything was “fixed and predetermined.”

Gain, who was one of the invited judges for the seventh season, also fell victim to the show’s editing.

The singer eliminated one of the participants, and then she came under fire for disqualifying a talented participant from moving up to the next round. But it later turned out that Gain actually passed the participant.

Cultural critics say there is a reason the show keeps editing that way.

“The success of an audition show is highly dependent on storytelling,” said Kang Tae-kyu, a culture critic and professor of applied music at Gangdong University. “The show can’t judge people just based on their vocals. When human stories are added, the show can bring even more dramatic effect.”

“But people are no longer interested in this format,” Kang added. “They have been watching TV audition shows for years. Nothing is new to them because the viewers already know the whole concept.”

An insider in the music industry told Ilgan Sports, an affiliate of the Korea JoongAng Daily, that “‘Superstar K’ has lost many talented people to its rival shows such as ‘K-Pop Star’,” which is one of reasons for the show’s failure.

In the sea of TV audition shows, “K-Pop Star” survives because it differentiates itself from other similar programs by featuring three judges, who are the heads of major entertainment agencies: Yang Hyun-suk of YG Entertainment, Park Jin-young of JYP Entertainment and You Hee-yeol of Antenna Music.

It is not an exaggeration to say that the three shape the country’s entertainment scene.

Unlike “Superstar K,” which has been struggling with falling viewership, “K-Pop Star” set a record in the previous season by achieving 14.1 percent viewership, the highest ever in its history.

“K-Pop Star” also has much younger participants compared to “Superstar K,” because the former puts more emphasis on finding stars rather than musicians.

But the show is well-aware that it needs to change to cater to viewers who are getting used to TV audition shows.

“Last year, we introduced an invited judge system, and we decided to beef up the system this year by having more invited judges,” said Park Sung-hun, a producer for the show, during a press day event on Tuesday at the SBS headquarters in Mok-dong, Yangcheon District, western Seoul.

“Six invited judges from each entertainment agency are participating in the show,” Park added. “And they sometimes have different opinions about a participant, unlike the three main judges. Watching two groups of judges having mixed views of the same participant is one way to enjoy the show to the fullest.”