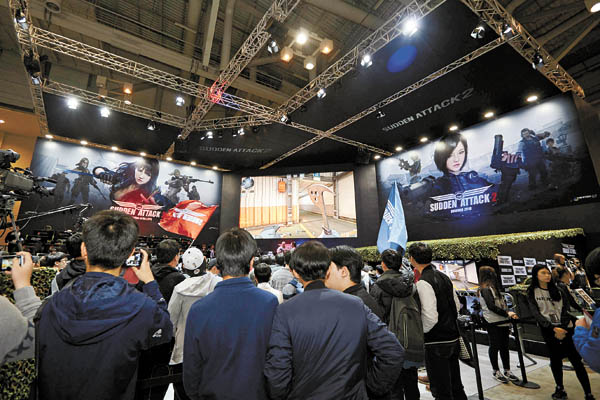 Visitors to the G-Star gaming exhibition gather at Nexon’s booth to demo Sudden Attack 2, the sequel to the popular online game. [NEXON]

The country’s largest gaming exhibition, G-Star, offered a comprehensive look at the latest trends in Korea’s gaming industry by the time it finished its four-day run last week at the Bexco convention center in Busan.

One of the most anticipated games featured was Sudden Attack 2, the sequel to a wildly popular online shooter game in Korea.

Nexon said the sequel, due to be released next year, has two new female characters, bringing the total number of playable characters to 10.

At one booth, gamers could demo the new iteration, as well as other forthcoming online games like Hyper Universe, Arpiel and Tree of Savior.

Throughout the days, throngs of visitors vied to make it inside the booth, testifying to the popularity of the shooter series. The first iteration still holds the Korean record for the most number of players logged in to an online game at the same time. 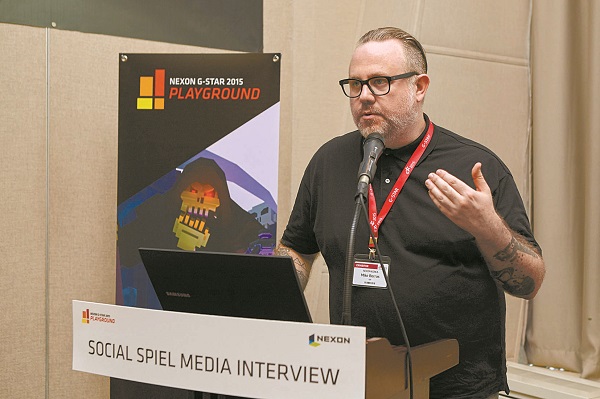 Along with the new characters, a number of new maps and features like a customizable weapons system are set to be introduced. Nexon also revamped Sudden Attack 2’s graphics and improved the hit feedback to provide a more immersive experience.

The highlight of the mobile section was Heroes of Incredible Tales, or HIT, a mobile action role-playing game (RPG) that has topped Korea’s iOS and Android markets in sales after its launch on Nov. 18. Within two days of the release, the number of people who downloaded the game surpassed one million.

Powered by the hyper-realistic Unreal Engine 4, HIT offers a fantasy world with vivid visual effects previously unseen on mobile devices
“It seems that the great graphics and sound storytelling have contributed to the success of the game and evoked a strong response from users,” said Lee Sang-man, head of Nexon’s mobile business division.

HIT is the brainchild of game developer Park Yong-hyun, who spearheaded the development of the successful Lineage 2.

The company also previewed a different action RPG, Legacy Quest, developed by Socialspiel and published by Nexon. Due to be released early next year, Nexon invited the CEO of Socialspiel to promote the upcoming game.

The game is inspired by classic 8-bit titles from the past and allows players to customize their player’s look.

Mike Borras, the CEO of Socialspiel, explained the format of the game during the event.

“We’re going to ensure that players are met with an awesome feeling of accomplishment in Legacy Quest, as they battle their way through hordes of monsters while sharing that adventure with friends,” Borras said.

The CEO also shared his view on G-Star and Korea’s gaming industry.

“The event has gotten bigger compared to the previous year,” he said. “While the North American market is centered around PC-based console games, Korea has seen the flourishing development of mobile game, something that we need to learn from.”

Legacy Guest will be launched in selected regions next year.

The company first teased a video clip of the global version of the game, which already launched in Korea five months ago. It launched the game on the global market on the last day of the exhibition.

The move is in line with Nexon’s efforts to bolster its presence abroad. Founded in Korea, the company still has a relatively small influence in the United States and Europe.

Ten years ago, Nexon moved its headquarters to Japan and was listed on the Tokyo stock exchange at the end of 2011.

The company made approximately $1.8 billion in revenue with an operating income margin of around 35 percent. The United States and Europe together make up less than $100 million of the total revenue.

Most of its customers come from China, followed by Korea and Japan.

G-Star, which stands for Game Show and Trade All-Round, was created in 2004 as the first joint project by the Ministry of Culture and Tourism and the Ministry of Information and Communication under former President Lee Myung-bak to foster digital and cultural content.

Other players like NCsoft, Smilegate, 4:33, Ndivia and NHN, as well as foreign companies including Sony’s Playstation, also established booths in the consumer and business-oriented exhibition halls.

The exhibition featured 633 game developers from 35 countries in total, the largest number in its history.