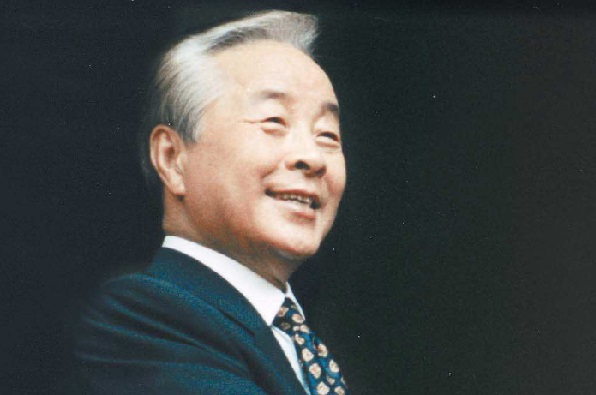 The nation - political supporters and detractors alike - mourned the death of former President Kim Young-sam, an icon of Korea’s democracy movement, who passed away Sunday at age 87.

He had been hospitalized since Thursday with a high fever.

Kim was previously hospitalized for 18 months from April 2013 to October 2014 for stroke and pneumonia.

A native of Geoje Island in South Gyeongsang, Kim served as the first elected civilian president of Korea from 1993 to 1998, following decades of military rule.

Former leaders of the country and current politicians flocked to the former president’s wake at SNU Hospital in Jongno District, central Seoul, on Sunday, to grieve his passing and recall his legacy of helping to build a more democratic nation.

Former Prime Minister Kim Jong-pil - who was at times a rival and at times an ally to President Kim- arrived at the wake in a wheelchair. “He will forever be remembered in the hearts of the people as a leader of convictions,” he said.

The two-time former prime minister was one of the “Three Kims” that dominated the Korean political scene in the 1980s and 1990s, along with former presidents Kim Dae-jung and Kim Young-sam.

Ruling Saenuri Party Chairman Kim Moo-sung wept at the wake and said, “My heart aches so much. I am former President Kim’s political child.”

The Saenuri chief began his political career as an aide to the former president and has been known as a member of the party’s so-called Sangdo-dong faction, which refers to Kim Young-sam loyalists and is named for the location of his residence.

“He was an extraordinary hero who achieved great reforms during his term that cannot be copied by anyone,” the lawmaker added.

Also in attendance was the opposition New Politics Alliance for Democracy Chairman Moon Jae-in, who noted the late Kim’s achievements: “He led the democratic movement, established a civilian government, enabled economic justice through the real-name financial transaction system and started a new trend of property registration for public officials.”

Kim Young-sam is often remembered for stating in 1979, when he was expelled from the National Assembly for his antigovernment activities under the Park Chung Hee regime, “You may wring a rooster’s neck, but the dawn still comes.”

This saying has become a catchphrase for Koreans yearning for democracy, and Moon recalled the quote on his Facebook account, adding, “Let us once more mull these words.”

The late Kim’s wife, Son Myung-soon, attended the wake but did not speak to reporters. She married Kim in 1951 when she was a Ewha Womans University student. She was not by his side when he died because she was at their residence in southern Seoul.

President Park Geun-hye expressed deep condolences for Kim’s passing though her spokesman because she was in Malaysia for the East Asia Summit and Asean-related meetings.

“The government will, in accordance with related laws and the wishes of the bereaved family, prepare a funeral with the greatest courtesy. I express my deep condolences to the bereaved family members and pray for the deceased [former President Kim],” said presidential spokesman Jeong Yeon-guk, quoting Park.

Likewise, former President Chun Doo Hwan - whom Kim pardoned after the former dictator was sentenced to death - released a statement about Kim’s passing. “He must be in a better place now, as a devout Christian,” he said.

Former President Roh Tae-woo, who was also pardoned by Kim in 1997, expressed his condolences from afar since he could not attend the wake due to health issues.

President Kim led the country during tumultuous times, including the 1994 nuclear crisis.

Pyongyang had threatened to withdraw from the Nuclear Non-Proliferation Treaty, but the crisis was defused in 1994 after U.S. President Jimmy Carter met with North Korean leader Kim Il Sung for the first time in Pyongyang. Kim had a strong will to improve inter-Korean relations, and Carter brokered the first summit between the leaders of North and South Korea for late July 1994.

Unfortunately, Kim Il Sung died on July 8 before the scheduled talks, and the first inter-Korean leaders’ summit was not held until six years later in 2000.

Kim’s term drew to an end during the panic following the Asian Financial Crisis of 1997, which forced Korea to receive a massive bailout from the International Monetary Fund and dealt a major blow to national morale.

The government held a Cabinet meeting Sunday, presided by the Prime Minister Hwang Kyo-ahn, about Kim’s funeral. The interior minister is in charge of organizing the funeral.

“The late Kim Young-sam dedicated his whole life to democratize and develop our country as the 14th president,” Prime Minister Hwang Kyo-ahn said at the meeting. “The government will do its best to commemorate him with the state funeral.”

A state funeral for Kim will be at 2 p.m. on Thursday, after a five-day mourning period.

His funeral procession will depart from in front of the National Assembly, and he will be laid to rest at the Seoul National Cemetery in Dongjak District.

Government buildings will fly the Korean flag, or Taegukgi, at half-staff during the mourning period.

The Seoul Metropolitan Government said it will install a memorial altar dedicated to the late president in front of City Hall that will be open 24 hours a day from Monday to Thursday.

The altar will, like the one erected for late President Kim Dae-jung be 22 meters wide, 10 meters high and 10 meters deep, and decorated with 24,000 flower blossoms.

Kim is survived by his wife, two sons and three daughters.

Several weeks before his death, the former president gathered his family members for dinner at a hotel in Seoul, which was in a sense a “last supper,” recalled his younger sister, Kim Ho-ya.

The former president, a devout Christian, sang the hymn “All the Way My Savior Leads Me” with his family.

The younger Kim said his older brother then recited to them one of his favorite passages from the Book of Isaiah: “So do not fear, for I am with you; do not be dismayed, for I am your God. I will strengthen you and help you; I will uphold you with my righteous right hand.”

Kim had been dedicated to recovering until the end, according to his children. His last wish was to be able to attend the opening of the Kim Young-sam Memorial Library in Dongjak District. However, the opening of the library has been delayed.

Kim left a final written message, which read, “Unity and reconciliation is what we need the most.”