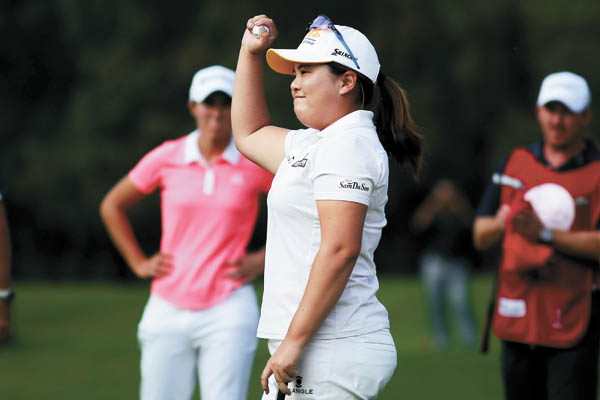 Park In-bee celebrates her win at the LPGA Lorena Ochoa Invitational in Mexico City on Nov. 15. Park is now qualified to enter the LPGA Hall of Fame, though she has to play one more season to receive the honor. [ap/newsis]

Park In-bee didn’t win the season-ending CME Group Tour Championship in Florida on Sunday, but the 27-year-old golfer earned something even better: eligibility to enter the LPGA Hall of Fame.

At the Tiburon Golf Club in Naples, Florida, Park finished sixth at the season’s final competition, ending 12-under 276. She went 3-under 69 in the final round.

American golfer Cristie Kerr won the event at 17-under to take her 18th career victory and $500,000 in prize money, edging Korea’s Jang Ha-na and America’s Gerina Piller by a stroke.

Until this event, Park was just one point shy of qualifying for the LPGA Hall of Fame, which requires 27 points.

Park’s final point came from winning this season’s Vare Trophy, which is awarded to the player with the lowest scoring average for the season. Park will officially enter the LPGA Hall of Fame following the completion of her 10th active season on the Tour next year.

Park had collected 14 points from her seven major victories, and 10 points for her other 10 LPGA event wins. The other two points came from earning LPGA Player of the Year in 2013 and the lowest scoring average title in 2012.

“Going into the Hall of Fame is something I’ve been dreaming of all of my life,” Park was quoted as saying by LPGA.com.

“That was the biggest goal in my career. Everything else is a bonus. I got a bonus.”

But world No. 2 Park wasn’t sure until the final moment that she’d won her second lowest-scoring-average title because the difference between her and top-ranked Lydia Ko was too small.

Park’s concerns grew when she made a bogey at the par-3 12th hole, but Ko eventually tied for seventh at just a stroke behind Park.

“The Hall of Fame was really on my mind all this week,” Park said. “I think I got too nervous like the last five or six holes coming in.”

Park will now become the second Korean to enter the LPGA Hall of Fame, after Pak Se-ri did so in 2007.

Unlike Pak, however, Park will not also automatically join the World Golf Hall of Fame - which also includes male golfers - due to a change in rules.

As of 2014, golfers are still eligible to enter the World Golf Hall of Fame after winning at least two majors or at least 15 regular events, but to actually join, the golfer must now be either over 40 years old or have had five years pass since his or her retirement.

Park is qualified by her winning record, but hasn’t met the other criteria.

Despite the honor, there was still some disappointment for Park, as she would have claimed the Player of the Year and prize money title from Ko had she won the final event. But the honors eventually went to the 18-year-old Korea-born Kiwi.

Ko became the youngest LPGA Player of the Year by beating Park by a mere two points for the award. She also won the LPGA prize money title and her second consecutive Race to the CME Globe Title, which gave her an additional $1 million.

Ko is the fourth player to claim the Rookie of the Year title and take Player of the Year during the her next season, after Nancy Lopez, Beth Daniel and Annika Sorenstam.

“At the start of the week, I would say the biggest trophy that would mean a lot to me would be the Rolex Player of the Year,” Ko said to LPGA.com. “I’m so thankful to my team. I’m still emotional.”

In her sophomore season, Ko collected five victories, including the major Evian Championship, which made her the youngest player in golf history to reach 10 wins. She has been consistent this season, having 12 top-10 finishes in her 24 tournaments.

Though major season honors went to Ko, it was still a great season for Park, who picked up five victories, including two major championships and the Career Grand Slam.

The LPGA Tour season is finished, but Park isn’t done. She will return to Korea today to compete in the ING Life Champions Trophy, which is held at Bayside Golf Club in Busan from Nov. 27 to 29.

The event features a total of 24 Korean ladies, and will see golfers from the U.S. LPGA Tour and local KLPGA Tour go head-to-head on separate teams.

Park is serving as a tournament ambassador.

“I have to put so much pressure on myself to get to one point,” Park said.

“I have to maybe wait all year. I don’t know what’s going to happen. That definitely put a lot of pressure off of me and I can really enjoy golf even more.”