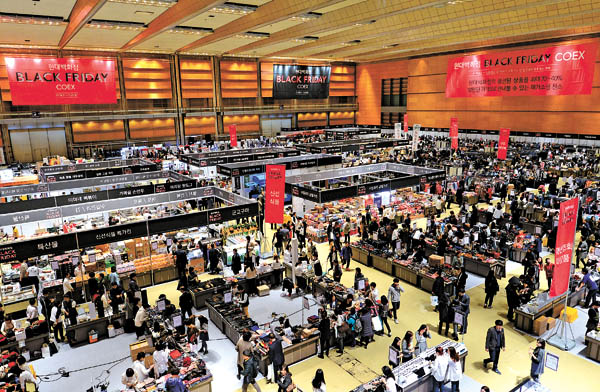 Hyundai Department Store’s discount event is held at COEX in Gangnam District, southern Seoul, since last week. It was the first time the retailer has sold products in a space other than its own brick-and-mortar stores or website. [NEWSIS]

In most ways, the scene on Saturday resembled any department store holding a weekend sale.

Hordes of shoppers picked through piles of discounted thermal underwear at one end of the floor, while at the other, a group inspected abalone on offer for half price. Even more lined up at a nearby food stand to get dumplings or other snacks from famous Itaewon restaurants.

But there was one big difference: this wasn’t actually happening at a big retailer’s brick-and-mortar store.

Instead, Hyundai Department Store had set up shop at the 6,620 square-meter (71,260 square-feet) exhibition and convention hall at COEX in Gangnam District, southern Seoul.

The event, dubbed H Black Friday, marked the first time the retailer held a discount event outside of its own venue since its founding in 1985.

Running from Nov. 18-22, H Black Friday saw 35 billion won ($30 million) worth of products - running the gamut from clothing and shoes to flat-screen TVs and refrigerators - at discounts of up to 80 percent.

The event drew large crowds, in part because of its strategic location next to Food Week Korea. Visitors who had shown up to ogle treats made by Korea’s top bakeries were drawn into the discount event because the halls were side by side.

The event was part of the larger K-Sale campaign, in which other department stores, including Lotte and Shinsegae, also participated.

In its first week, Hyundai Department Store estimated its sales rose 15.2 percent compared to the same period last year. During the same week in 2014, its sales grew just 2.2 percent year on year.

“We have taken preemptive marketing ahead of the U.S. Black Friday,” said Kwon Tae-jin, head of marketing team at Hyundai Department Store.

Even when excluding the sale at COEX, other discount events held at branches of Hyundai Department Store nationwide have raised sales an estimated 10 percent compared to last year.

Lotte Department Store also projected that sales during the weekend in which it held its own discount event have upped 10.4 percent.

This is a significant achievement considering that its year-end event in 2014 only pushed sales up 1.8 percent, and its beginning-of-the-year event in 2015 only boosted sales 0.5 percent.

Shinsegae Department Store, which also participated in the K-Sale campaign, said sales went up 5.8 percent during the weekend.

Black Friday, which kicks off in the United States the day after Thanksgiving, has been a huge threat to the Korean retail industry.

The Retail Federation of the United States estimates that retailers will earn $630.5 billion from Black Friday sales this year. Although Korean retailers have also enjoyed their own sales boosts by borrowing the concept and name, local retailers are still worried about the impact that the U.S. Black Friday will have.

During Black Friday events last year, Koreans purchased 800 billion won worth of products from the United States via the Internet.

According to the Korea Custom Service, Koreans bought roughly 1.8 trillion won worth of goods from overseas websites in 2014. This year, those purchases are expected to exceed 2 trillion won, largely because the Korean government has expanded the number of items that are nontaxable and simplified customs inspection processes.

As competition has been heating up, some American companies have already pushed forward the dates of their Black Friday sales, which is supposed to take place on Nov. 27, the day after the Thanksgiving holiday.

Big-name retailers like Best Buy, a consumer electronics retailer; Toys R Us, the world’s leading toy store; and even Target and Walmart are planning to start their sales on the Thanksgiving holiday itself on Nov. 26.

The companies are also increasing their discounts.

According to American consumer research group WalletHub, which studied 8,000 products based on their Black Friday commercials and other advertisements, jewelry is discounted 73 percent on average, while books are marked down 56 percent, and clothes are at 50 percent off.

Korean retailers have no plans to stop its discount event, even when faced with the United States’ Black Friday. Some are even stepping up their game.

Lotte Department Store plans to hold Ralph Lauren Black Week beginning on Friday, where it will exclusively sell the popular “polo bear” sweater. Ralph Lauren is one of the most purchased brands among Korean consumers during Black Friday sales.

Shinsegae Department Store is raising its discounts up to 90 percent on imported clothing directly purchased by its affiliates, including Shinsegae International.

According to the Ministry of Trade, Industry and Energy, the three major department stores - Hyundai, Lotte and Shinsegae - earned 266.9 billion won during Korea’s Black Friday event held in the first two weeks of last month.

The three major discount stores - Lotte, E-Mart and Homeplus - raked in 35.7 billion won, which is a 3.6 percent increase year on year. The 11 online shopping malls enjoyed a sharper increase in their sales at 30 percent, growing to 216.1 billon won.