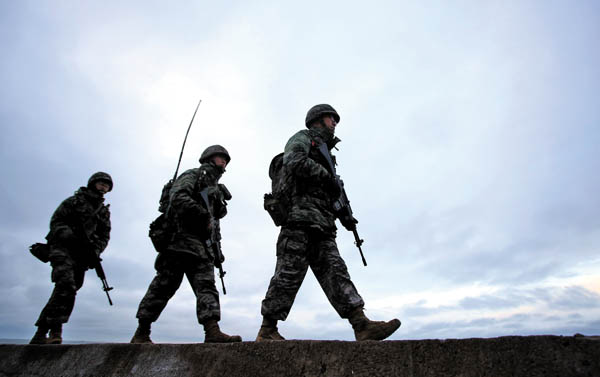 Marine forces patrol the coast of Yeonpyeong Island in Incheon on Monday during the fifth anniversary of North Korea’s shelling of the western border island. [NEWSIS]

South Korea’s Marine Corps held a live-fire drill in the Yellow Sea on Monday, as the country marked the fifth anniversary of North Korea’s shelling of Yeonpyeong Island.

The live-fire exercise, which mobilized K-9 self-propelled artillery launchers, was held despite warnings from North Korea on Sunday that it would react “mercilessly” if the South pushed ahead with the scheduled drill near the tense maritime border.

Monday marked the fifth anniversary of the Yeonpyeong Island shelling, which was North Korea’s first attack on South Korean soil since the 1950-53 Korean War. The bombardment of shells left two Marines and two civilians dead and further froze inter-Korean relations under the Lee Myung-bak government, which had accused the North of torpedoing the Cheonan warship in the Yellow Sea eight months earlier. The North denies responsibility for the sinking, which killed 46 sailors.

The drill proceeded without response from across the border.

Ministry of National Defense spokesman Kim Min-seok said during a press briefing before the exercise that the military would sternly respond if the North carried out any form of provocation. He also stressed that the exercise was merely one of many regular live-fire exercises.

The K-9 self-propelled artillery launchers used in the Monday exercise were the same guns that returned fire at the North Korean military in retaliation for the shelling in 2010.

“We carried out a large-scale live-fire drill in consideration of the fact that North Korea attacked South Korean land for the first time since the Korean War on this day five years ago,” a military official said on the condition of anonymity. The official added that the military had initially planned to keep the drill undisclosed but changed the plan after Pyongyang openly criticized the drill plan on Sunday. The South notifies the North ahead of such drills and vice versa.

The military also debated delaying the drill in consideration of recent progress in inter-Korean relations, including scheduled working-level talks on Thursday at the border village of Panmunjom, which will be the first official contact between the two Koreas since the reunions of separated families last month. Another military official said the armed forces decided to stick to its schedule to “maintain military readiness” against North Korean threats and because it was a regular exercise planned in advance.

Earlier in the day, the Ministry of Patriots and Veteran Affairs held a memorial for the two Marines killed five years ago at the War Memorial of Korea, which was attended by Prime Minister Hwang Kyo-ahn, Defense Minister Han Min-koo and Seoul Mayor Park Won-soon. President Park Geun-hye couldn’t make the event because she had just returned from a 10-day overseas trip.

In a video message played at the ceremony, Park pledged an “iron-clad defense posture” against North Korean threats.