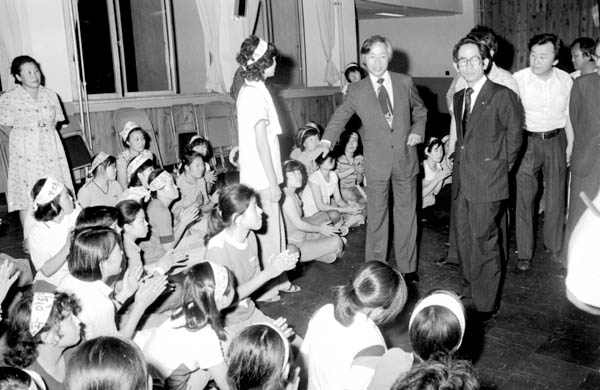 Kim Young-sam, then-head of the New Democratic Party, talks with dismissed female workers from a wig factory, YH Trading, in 1979 after allowing them to use his party headquarters as a sanctuary. During a brutal police crackdown on the protest, dozens were injured and one was killed. [JOONGANG PHOTO]

One Korean woman took a very personal interest in the death of former president Kim Young-sam.

Kim fought for her right to a job and a salary, however paltry, 36 years ago.

And she has never forgotten.

“Former President Kim was an empathetic comrade,” Ms. Seol, 60, said of the late leader to the JoongAng Ilbo on Sunday. (She did not want her full name published.) 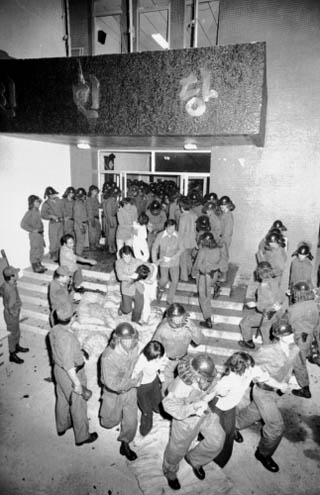 Police arrest dismissed female workers from a wig factory who staged a protest at the New Democratic Party headquarters on Aug. 11, 1979. [JOONGANG PHOTO]

Upon learning of Kim’s death on Sunday, Seol went to the Seoul National University Hospital, where the former president’s morning altar was set up. So many politicians and other V.I.P’s were coming and going, she could only watch from afar.

That was enough. “My heart is deadened,” she said. “I had to pay my last respect at least from afar.”

In August 1979, Seol was a young worker at wig-maker YH Trading. At the age of 24, she was the breadwinner of her household and had to support her parents and her younger sibling, paying for meals and even school fees.

Then the company announced it was closing because of heavy debts.

“In such a situation, a unilateral shut down was the same as telling me to give up on life,” Seol told the JoongAng Ilbo Sunday. “The electricity and water were cut off in our factory dormitories. For me, I realized what it meant to say your life is over.”

On Aug. 9, 1979, she and 200 other female factory workers marched to the headquarters of the main opposition New Democratic Party (NDP) in Mapo District, western Seoul, to ask for help.

“It was a matter of survival,” Seol said. “We all hugged each other tightly, weeping and saying, ‘What will happen to us now?’ Teary-eyed and with runny noses, we entered the NDP headquarters, and that is when we first met Chairman Kim.”

In 1954, Kim Young Sam became the youngest lawmaker in Korean history and then went on to becoming the youngest chairman of the NDP, which opposed then-President Park Chung Hee’s Yushin Constitution and dictatorship. It also supported labor, which the Park government tried to suppress to keep exports competitive.

“The first words Kim uttered to us was, ‘Welcome everybody.’ Then he said, ‘I will pledge my political career to protect you till the end.’ Hearing those words, I held the hands of my comrades tightly. We were relieved.” Kim granted a sanctuary for the young women, a place to stage a sit-in.

Then Kim bought the workers bibimbap, saying, “Your stomach has to be full to have strength.” His wife Son Myeong-sun was also there. According to Seo, she said, “You are our daughters’ ages, so you are all like daughters, and my heart hurts.” She provided them with bread and milk.

The sit-in did not last long. On Aug. 11, there was a violent clash with some 1,200 police officers. The female workers were dragged out of the party building by the police in just 23 minutes.

A 21-year-old factory worker, Kim Kyung-suk, died after falling from the roof of the building amid the scuffle.

Another factory worker who participated in the sit-in, 59-year-old Jeong Man-ok, plans to pay respects at the memorial altar set up for the late president at Seoul Plaza. When young Kim Kyung-suk died, she recalls Kim consoling them, telling them, “Don’t cry. Don’t shed a tear. It was not your fault.”

“But Chairman Kim cried with us,” Jeong recalled. “When I heard of his death, I thought of that image from 36 years ago first. I hope former President Kim has passed to a better place.”