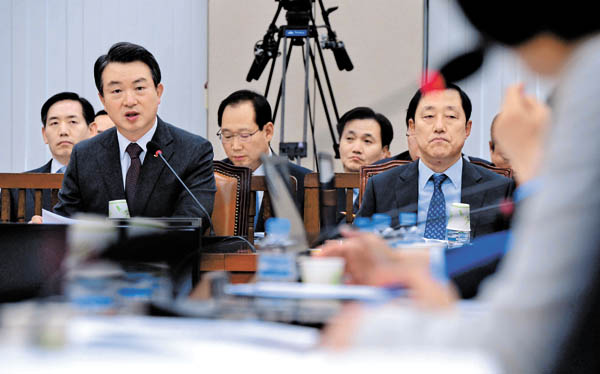 Korea’s top police chief succumbed to pressure to apologize for the knocking down of a 68-year-old farmer by a riot police water canon at a Nov. 14 rally, saying Monday he was “regretful.”

National Police Agency Commissioner General Kang Sin-myeong, however, quickly backpedalled to say the apology was from a “humanistic” point of view and shouldn’t be confused with a “legal apology.”

As authorities continue to be unclear about official policy about the use of water cannons in riot control, Kang said it was premature for him to take any stronger steps and that it would be “irrational” for him to judge a case only by looking at the result.

“A humanistic apology and a legal apology are two very different matters,” the chief said during a Security and Public Administration Committee meeting at the National Assembly. When authorities look into the case more carefully, an appropriate apology could follow and whoever was responsible will be held responsible, he said.

Approximately 64,000 people from 53 left-wing labor groups and organizations gathered in downtown Seoul Nov. 14 to demand the government reform the labor market in favor of blue-collar and temporary workers, retract a policy of the government writing history textbooks, ban rice imports and crack down on Korean conglomerates, among other points.

Organized by the Korean Confederation of Trade Unions (KCTU), the gathering was the largest since 2008, when hundreds of thousands of people nationwide took to the streets each day for over a month in a bid to ban U.S. beef imports, which were considered hazardous because of mad cow disease.

One of the most violent moments of the day came when Baek Nam-gi, a 68-year-old farmer from Boseong County, South Jeolla, was knocked down by a water canon and collapsed, losing consciousness before being taken to Seoul National University Hospital with a brain hemorrhage.

Baek has yet to regain consciousness after surgery and has become a symbol of the rally and police brutality.

Labor unions have called on Kang to take full responsibility and resign from his post, claiming police officers misused the “deadly weapon” and aimed straight at Baek’s head, which is against domestic law.

Local authorities tasked with tracking down hundreds of people who assaulted police officers and damaged their equipment in the Nov. 14 rally expanded their probe Saturday by raiding 12 offices of eight organizations thought to have played some role in the rally.

Revealing the confiscated materials to local media, officers from the Seoul Metropolitan Police Agency said they found seven hatchets and cutting tools, a police helmet, ropes and a police walkie-talkie, all of which are subject to further investigation.

Authorities also said the KCTU is suspected of destroying evidence ahead of their raid, as 46 of the 52 desktop computers collected that day were intentionally damaged.

The KCTU was one of the eight organizations whose offices were searched. The country’s largest umbrella labor union adamantly denied that the objects were related to the Nov. 14 protests.

In a rare public statement during his flight from arrest, Han Sang-kyun, chairman of the KCTU, denounced the raid via his personal Facebook account, saying Kang was “growing mad” and that he was taking the lead role of a “revival of the Yushin era.”

The Yushin era refers to the 1970s when former President Park Chung-hee, the late father of current President Park Geun-hye, ruled the country through an authoritarian regime.