Men’s golf wrestles with a crisis of leadership

Men’s golf wrestles with a crisis of leadership 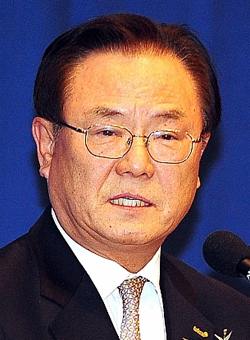 The men’s professional golf tour in Korea is suffering from a leadership crisis as it struggles to expand.

This year, there were only 12 events in the top-tier men’s tour, which was less than half the size of the women’s KLPGA Tour.

The Korea Professional Golf Association (KPGA) was hoping to revive the KPGA Korean Tour with new leadership, as current president Hwang Sung-ha’s term expires at the end of this year.

However, the road to finding a new president is already rocky as the members of the original election committee resigned on Monday over claims of “interference”, and a new committee was hurriedly formed on Tuesday.

Former Korea Cable Television & Telecommunications Association Chairman Yang Hwee-bu is now the only candidate after Hoban Construction Chairman Kim Sang-yeol withdrew his nomination on Nov. 18 - two days after he declared his candidacy. As a result, the election for the 17th KPGA president on Saturday is going to be a one-horse race.

The new KPGA president, who will serve a four year term from Jan. 2016, needs to win more than half of the votes from 201 senior members.

On Monday, four members from the KPGA election committee, who were all former KPGA presidents, resigned over “interference” and said the neutrality of the election is under threat.

“The fairness of the election is not guaranteed here after we found out that there were actions that pressured certain candidates to retire,” the committee said in a release.

“In addition, the neutrality is damaged because a document that shows collusion of some media and companies are floating around online.”

According to the committee, the document, which promises avid support for Yang, was recently distributed to some KPGA senior members.

Before he pulled out of the election, Kim announced he plans to expand the tour with nine more events next year bring in more sponsors. As well, he said he would support the KPGA with total of 4 billion won over the next four years. His company Hoban Construction owns Sky Valley Country Club in Yeoju, Gyeonggi, and runs a golf team.

However, the 54-year-old abruptly resigned just a day after Yang registered as a candidate.

“I’m filing the resignation of my candidacy since there is concern that this election campaign can aggravate friction and dissension inside the KPGA,” Kim said in a release on Nov. 18. “In order for the KPGA’s development, I think unity and accord between members should be carried out in advance.”

Yang, 72, a former reporter at KBS, said he will make the tour bigger with more events, promising that at least 18 events will be held next season with details to be announced by January.

Yang denied rumors they pressured Kim to give up his candidacy. “I’m not in a position to pressure Kim,” Yang said in a press conference on Tuesday. “The document was created by supporters in my election camp. I don’t think the content itself is wrong, but it’s a pity that the document was circulated all over the place.”

Yang lamented there resignation of the election committee members’, saying they have abandoned their duty.

“If they [election committee] found activities that damage fairness and impartiality, they should find and correct it because that’s their job,” Yang said. “It’s like firefighters just running away when the building caught on fire.”

Yang said if he becomes president he will focus on making the right rules to patch up differences and clear the friction between members.

“For the KPGA, I want to contribute my talent, instead of giving financial support,” he said. “As for uniting members, just give me two years, and I will do it.”

This isn’t the first time the KPGA has suffered trouble with leadership. In 2012, lawsuits were involved as two groups fought for their choice of president.? The dispute cooled down after Hwang took over the job in Oct. 2012.

However, it was difficult for the men’s tour to recover from its damaged public image, while the women’s tour kept expanding.

“I thought we had a good opportunity to restore the success of men’s golf, but now my heart is breaking apart,” said Lee Il-an, now former chief of KPGA election committee. “The KPGA members should scrap this antagonism and discord and stand behind a talented person as the new president.”