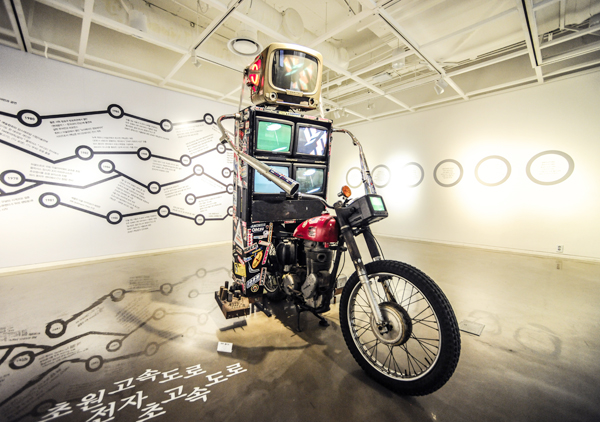 As the 10th anniversary of death of Korean-born artist Nam June Paik, regarded as the founder of video art, approaches, several exhibitions and events are in preparation.

As the first of them, the “Paik Nam June Groove” exhibition recently started at the Sejong Museum of Art in central Seoul and runs through Jan. 29, 2016, the 10th anniversary of the artist’s death.

“The exhibition focuses on helping the viewers understand what context Paik created his diverse video art in,” said Kim Noam, co-curator of the exhibition.

“So, we are presenting more texts of quotations from the artist’s remarks and from the critical writings about him on the walls of the exhibition rooms than previous shows of the artist. And we have juxtaposed Paik’s video art pieces with many related materials including photos and documents.”

Accordingly, the exhibition concentrates on archiving Paik’s oeuvre - which is useful for students and researchers interested in the artist - rather than displaying many spectacular video sculptures by Paik.

Those who buy a ticket for the exhibition are allowed to visit two times, as part of the exhibition organizers’ efforts to bring about an in-depth understanding of Paik.

Meanwhile, the Nam June Paik Art Center in Yongin, Gyeonggi, signed a memorandum of understanding with the Kansong Art and Culture Fountain on Nov. 11 to create a unique exhibition that combines Paik’s works with Korean traditional art, based on the two institutions’ joint research into their collections.

Kansong is famous for housing about 5,000 Korean artifacts including 12 National Treasures, while the Nam June Paik Art Center has more than 2,200 pieces of art and materials related to the video art pioneer.

“Paik imbued his works of Western technology with East Asian philosophy, so the research into his works together with Korea’s traditional art could bring about a milestone in 21st-century culture,” said Lee Jin-myung, a curator at Kansong.

The joint exhibition will take place at Dongdaemun Design Plaza in central Seoul in the second half of next year.