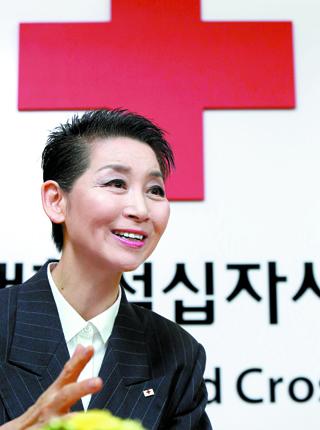 In late October, some 980 families were finally reunited after being torn apart by the 1950-53 Korean War. The families had to say goodbye after a heartbreaking 12 hours together.

Kim Sung-joo, the 59-year-old president of the Korean Red Cross, is one of the Koreans who grieved with the families as they parted.

Kim has long stressed the importance of regularizing the family reunions before everyone who remembers Korea before it was divided dies.

Humanitarian contact between the two countries is highly restricted, but Kim is as optimistic as ever.

“The North Korean Red Cross was highly active in promoting the reunion,” she said. “If we can manage to get more talks between senior ministers of both South and North Korea, we may be able to regularize the reunions.”

Last month marked the first anniversary of Kim as the president of the Korean Red Cross. This year also marks the 110th anniversary of the establishment of the Korean Red Cross. With this momentum, the Joongang Ilbo sat down with Kim on Nov. 13 to hear about the October family reunions and what Kim has done to contribute to South and North Korean exchanges.

Q. How was the reunion in October?

A. I heard a number of touching stories. Although separated siblings, parents and children seemed happy to meet each other again, couples who were separated seemed somewhat awkward. There were many husbands who remarried and had children and grandchildren while their first wives lived as widows.

So I suggested to Ri Chung-bok, the North’s reunion leader and central committee secretary general of the DPRK Red Cross Society, that everyone sing “Arirang,” a Korean folk song, together, as Koreans like singing. Although he refused at first, I started chanting, “Let’s sing Arirang together,” and everyone eventually started to sing the song.

Reporters later told me that it was one of the best parts of the reunion. Although the North worried about it at first, they later admitted the atmosphere got better and agreed to bring more entertainment to the reunions from now on.

Why did you suggest singing “Arirang”?

This wasn’t the first time, actually. A meeting was held among the Red Cross of five northeast Asian countries in June in Mongolia.

How did the discussions with the North go?

About five days before the reunion, the North suddenly changed the leader of the reunion to Ri. Until present day, both North and South Korean leaders of the reunions were somewhat old, and one person used to serve as a leader for a decade or two. However, Ri was around my age - relatively young. I considered it a good omen that the North chose the right person to communicate with me. As I had expected, the discussion before the reunion went fine, and even began with a few small jokes.

Did you achieve any tangible results?

As always, the South Korean delegation led the topic of the discussion towards regularizing a reunion of separated families from now on. Surprisingly, Ri was highly optimistic about this and said it would be nice, even though we didn’t have the authority to make the final decision. He also added that since the reunion cannot be regularized in a day, preparations are needed, including the maintenance of a positive relationship between the two countries.

How did you reply?

The South Korean delegation responded, “Isn’t it more important to confirm who among the separated families is alive or dead than to create the background for reunions?”

South Korea has already hired 100 volunteers and determined that 66,000 among the total 120,000 separated families in the country are still alive. We could not contact 35 percent among them, and even many people who answered us said they wouldn’t be able to attend a reunion because of personal reasons, like health problems.

As a result, we found that about 30,000 of the total separated families were hoping to be reunited. As I told this to Ri, he said the North is also checking on separated families, which came as a big surprise.

Does that mean all separated families will be able to reunite again?

The fact that the North was confirming the life and death of the families boosted our spirits about the reunions. Ri suggested a ministerial talk take place soon because a reunion or other South-North exchanges can be made only after such a talk is held. After hearing the North’s opinions, I think the country has a strong desire to regularize reunions.

What is the next phase?

The most crucial thing is to exchange the names of the separated families in each country. The South already finished our inspection, and the North also said they are preparing the list. I would really like to see it exchanged as soon as possible.

Did the two countries talk about any other things?

Ri asked what sorts of things the Korean Red Cross could do. I told him we would like to build a center for maternal and newborn health in the Kaesong Industrial Complex in North Korea, where the majority of the nearly 54,000 North Korean workers are women, and send them things like powdered milk.

I also told him about building a Red Cross hospital and blood center at the complex. Ri was enthusiastic about a long-term plan for those projects. As the North was considerably positive about our proposals, I’m sure everything will go smoothly once they are initiated.

How can the Korean Red Cross’s activities contribute to the South and North’s unification?

Egon Bahr, a Social Democrat in West Germany who laid the groundwork for German unification, said “Always think about unification, but don’t just talk about it.”

He meant that unification is just a process. We should just make steps towards unification in order to achieve it. I think only the Red Cross is the organization that can cross the border and contribute to reunification.