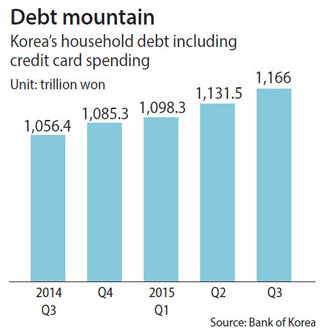 Korea’s household debt and credit card spending not only reached a new high in the third quarter but also grew at the fastest pace since data has been compiled due to a percolating real estate market and the government’s encouragement of consumer spending to help the economy.

But the risks of Korea’s mountain of household debt only grows as the U.S. central bank gets closer to finally raising interest rates, which it may start next month.

According to the Bank of Korea on Tuesday, the outstanding debt and credit card spending during the July-September period amounted to 1,166 trillion won ($1.02 trillion), breaking the previous record of 1,131.5 trillion won set three months ago.

When compared to a year ago, debt and credit card spending showed a sharper growth of 10.4 percent, or an additional 109.6 trillion won.

Of the 1,166 trillion won total, debt borrowed from households accounted for the largest slice, at 1,102.6 trillion won, and an addition of 30.6 trillion won from the previous quarter, or 2.9 percent.

Even borrowing from nonbanking financial companies, including savings banks, cooperatives and insurance companies, grew to a total of 561 trillion won, an increase of 16.2 trillion won, or 3 percent.

The increase in mortgage lending was an uptick in the real estate market fueled by aggressive interest rate cuts by the central bank since the second half of last year. Real estate transactions even grew in August, which is unusual because summer is considered an off season. But cheaper loans continued to inspire homebuyers.

Another big change in the third quarter was credit card spending, which increased 3.9 trillion won, or 6.6 percent, to total 63.4 trillion won. That is the biggest increase in almost two years. The last time credit card purchases grew more than 3 trillion won was in the fourth quarter of 2013, when 3.8 trillion won of fresh spending was registered. The central bank said the increase in spending was the result of the country’s recovery from an outbreak of Middle East respiratory syndrome that peaked in June. Since then, the government has been encouraging the public to spend by lowering the taxes on high-end products like luxury bags and premium vehicles. That spending is likely to grow more aggressively in the fourth quarter due to other moves by the government to boost the domestic market, such as a Black Friday sale and other discount events.

But when the U.S. Federal Reserves starts raising its interest rates, the Bank of Korea is expected to follow. Many loans will become more expensive to service.

According to a report by the Bank for International Settlements in September, Korea ranked the highest among 14 emerging economies for its household debt-to-GDP ratio last year, which was 84 percent. This was not only higher than the 30 percent average of the emerging markets but also 11 percentage points higher than the 73 percent average of 26 developed countries. It is 12 percentage points higher than the 72 percent that Korea registered in 2007, a year before the global crisis erupted. Other studies show that households’ ability to pay off debt from disposable income is worsening.

“If possible, it would be best to switch from variable rates to fixed rates and products where the borrower can pay back the principal in installments,” said Lee Joon-hyup, a senior analyst at Hyundai Research Institute.