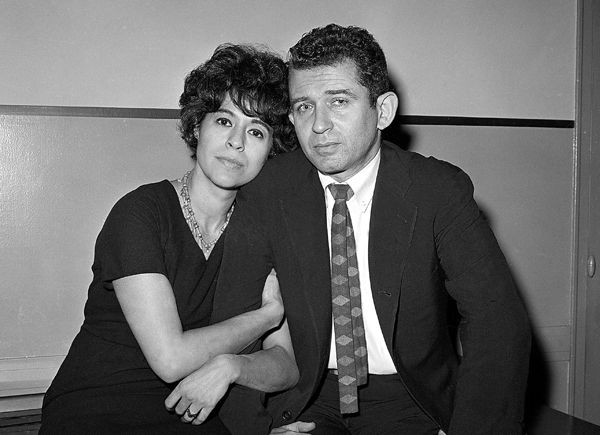 NEW YORK - Adele Morales Mailer, an actress and artist who studied under Lee Strasberg and Hans Hoffman, but found unwanted fame as the stabbing victim of her then-husband Norman Mailer, died Sunday at age 90 at New York-Presbyterian Hospital.

The cause was pneumonia, daughter Danielle Mailer told The Associated Press on Monday.

“She wanted to be remembered as a gifted painter and actress and as a mother who was fiercely devoted to her [two] girls,’’ Danielle Mailer said, while acknowledging that she would be known to many for an act of violence her husband committed 55 years ago.

Adele Morales Mailer was the second of Norman Mailer’s six wives. They had been married six years when in November 1960 they got into a drunken argument after a party at their Manhattan apartment and the author stabbed her near the heart with a penknife.

The widely reported incident left her in critical condition, with wounds in her abdomen and back. Norman Mailer was indicted for felonious assault, but Adele declined to press charges, saying she wanted to protect their daughters. He later received a suspended sentence after pleading guilty to third-degree assault.

“I came in contact for the first time in my life with the depths of my own rage,’’ he later said of the stabbing, which helped define his belligerent image.

The Mailers were divorced in 1962 and Adele remained scarred and angry for decades after, her daughter told The Associated Press. While Norman Mailer’s career continued with barely an interruption, Adele ended up in a Manhattan tenement.

“I can’t believe I’ve come to this, and a lot of that is due to him, because Mailer wouldn’t help me,’’ she told The New York Times in 2007, not long after the author’s death. “I’m living in poverty.’’

Danielle Mailer said her mother remained dedicated to art after her marriage and turned her home into a “giant installation’’ of assemblages, her chosen medium.

“She lived and breathed her art and she passed it on to us,’’ Danielle said, noting that she was a painter and her sister, Elizabeth, a writer.

Adele Mailer wrote of the stabbing in her 1997 memoir, “The Last Party,’’ and recalled it for the 2010 documentary “Norman Mailer: The American.’’