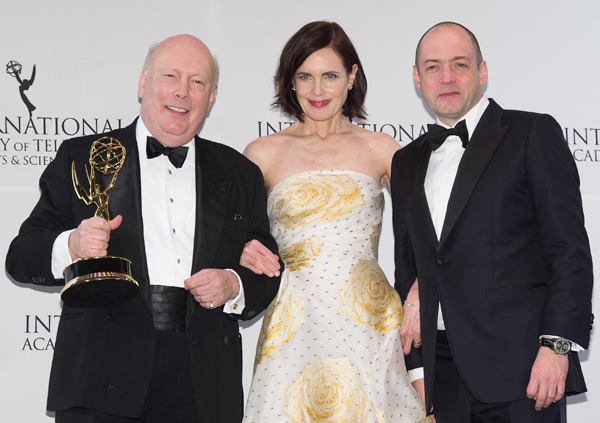 The highlight of the awards ceremony at the Hilton New York came when “Downton Abbey’’ creator and writer Julian Fellowes was presented the honorary International Emmy Founders Award.

The timing was fitting with the British period drama due to wrap up its sixth and final season with a Christmas Day finale on Britain’s ITV. PBS is set to begin airing the final season in the United States on Jan. 3.

Elizabeth McGovern, who stars as Lady Cora, and the show’s executive producer Gareth Neame presented the award to Fellowes.

“Downton Abbey,’’ depicting the lives of the aristocratic Crawley family and their servants amid the backrdop of such historical events as the sinking of the Titanic and World War I, has become won of the world’s most popular TV shows.

This year saw an end to Britain’s past dominance at the International Emmys, created to honor excellence in television programming outside the United States. This year, 40 nominees from 19 countries were competing in 10 categories.

Britain’s only win came in the non-scripted entertainment category for “50 Ways to Kill Your Mammy,’’ in which thrill-seeking Irish TV presenter Baz Ashmawy cajoles his 71-year-old mother into doing daredevil stunts such as skydiving and alligator wrangling.

The best actor award went to Maarten Heijmans of the Netherlands for “Ramses,’’ which chronicles the rise and fall of the popular Dutch singer and actor Ramses Shaffy. Norway’s Anneke von der Lippe won the best actress Emmy for “Eyewitness’,’ in which she plays a police chief in a small town caught in the middle of a murder investigation.

“Engrenages,’’ which offers a realistic look at the French judicial system from police detectives to lawyers and judges, was a previous International Emmy nominee, but won for its fifth season in which its heroes try to unravel the double-murder of a mother and child as they plunge into a world of organized crime, drugs and girl gangs.

“Soldat Blanc’’ (‘’White Soldier’’), about two young soldiers in Saigon whose friendship is shattered when they end up on opposite sides in the post-World War II Viet Minh insurgency against French colonial rule, took the Emmy for best TV movie/mini-series.

The other French winner was “Illustre & Inconnu: Comment Jacques Jaujard a Sauve le Louvre’’ (“The Man Who Saved the Louvre’’) about the French National Museum’s director who organized a resistance group to keep thousands of artworks out of the Nazis’ hands during World War II.