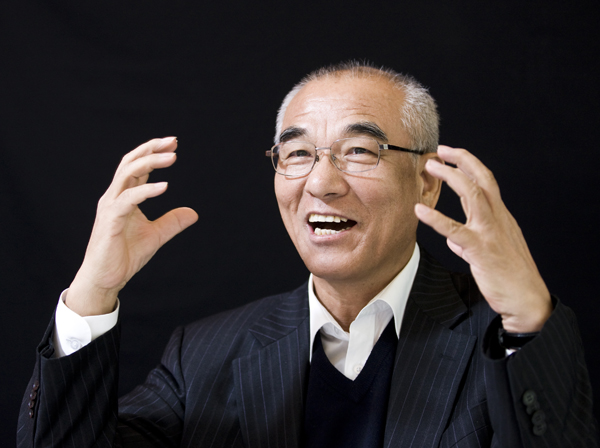 During the Lee Myung-bak administration (2008-13), Choe Kwang-shik served as the director of the National Museum of Korea, the head of the Cultural Heritage Administration and the minister of Culture, Sports and Tourism. [KWON HYUK-JAE]

But one could say that they’ve been rockier in recent years, as the North’s provocations grow bolder.

In spite of that, the two Koreas have recently made a leap forward in the area of cultural heritage.

In July of last year, 15 South Korean archeologists traveled to Kaesong, in the North’s North Hwanghae Province, and with their North Korean counterparts conducted a joint exploration at Manwoldae, where the vast royal palace complex used to stand during the Goryeo Dynasty (918-1392).

The joint archaeological project actually began in 2007, but due to political tension it came to a halt in 2011.

Because of that, the fact that the dig resumed at all is a feat in its own right. But beyond that it went on for 180 days, which marked the longest period of excavation at Manwoldae.

Furthermore, the two Koreas recently held the first exhibition of the findings of the joint archaeological exploration in Seoul and in Kaesong. The Seoul exhibition took place at the National Palace Museum from Oct. 14 to Nov. 6, while the Kaesong exhibition was held at the Goryeo Museum, from Oct. 15 to Nov. 15.

There have been close to no inter-Korean cultural exchanges since the North’s sinking of the South’s Cheonan warship near the Yellow Sea border in March 2010. Besides the project to create a joint dictionary - which began in 2006 but is seeing very little progress - the joint archaeological project at Manwoldae is the only inter-Korean cultural exchange that is ongoing.

One man who deserves a credit for this feat is Choe Kwang-shik, who is currently a history professor at Korea University. Choe, who served as the minister of Culture, Sports and Tourism from 2011 to 2013, has led the project since its very beginning.

“More than 10,000 artifacts have been uncovered from the site,” Choe said in a recent interview with the JoongAng Ilbo. “It’s notable how unusual-shaped celadon pieces and dragon-shaped architectural ornaments were found. Before, we only read about these in historical documents.”

Choe said he hopes the next step will be restoring the palace and building a museum and a storage facility for artifacts. “If Seoul and Pyongyang jointly operate the facility, it has the potential to become a global tourist attraction, tied to the Kaesong Industrial Complex.”

He added that he believes “the key in inter-Korean exchanges is building trust and sympathizing with each other.”

The interview with Choe focused on the Manwoldae exploration as well the inter-Korean response to China’s attempts to make the histories of its northeastern region (where ancient Korean dynasties used to occupy) its own.

The Roh Moo-hyun administration (2003-08) created a committee to tackle potential distortion of ancient Korean history by China and Japan, and asked Choe to take helm.

Choe played a pivotal role in inducing North Korea’s participation in the initiative. He launched the Inter-Korean Historian Conference. And the two Koreas conducted an archaeological exploration at the site of Anhak Palace (or Anhakgung) in Pyongyang.

Below is an edited excerpt of Choe’s interview with the JoongAng Ilbo.

From top: Historians from the South and the North meet on Oct. 15 in Kaesong for an academic conference and an exhibition. An Byeong-wu (left) from the South’s Inter-Korean Historian Conference and Ri Jin-wu from the North’s People’s Reconciliation Council shake hands; Historians visit Manwoldae; An exhibition of artifacts uncovered at Manwoldae is held in Seoul from Oct. 14 to Nov. 6 (pictured) as well as in Kaesong from Oct. 15 to Nov. 15. [JOONGANG ILBO]

A. I don’t think they could continue to deny the validity of the joint archaeological exploration, which is to restore the homogeneity of the Korean people. Goryeo is important to both North Korea and South Korea. North Korea for instance views Goryeo as the first unified state in the Korean history. Silla [57 B.C. to A.D. 935] ushered in the Unified Silla period [676-935], but technically it didn’t really merge with Goguryeo.

[Silla defeated Goguryeo with the help of China’s Tang Dynasty (618-907). The northern territory of Goguryeo, which extended to what is today southern Manchuria and southeastern Russia, was taken by Tang as a result.]

North Korean founder Kim Il-sung in the early 1990s restored royal tombs of Gojoseon [2333-108 B.C.], Goguryeo and Goryeo. It was because he wanted to prove that North Korea has its roots in the three kingdoms and is the legitimate successor. South Korea on the other hand considers Unified Silla as the first unified state in Korean history. However, South Korea views Goryeo as the re-unified state, which is also important. After all, the country’s name, Korea, came from Goryeo.

North Korea in 2003 began working to register the Kaesong Historical District [which includes Manwoldae] on the Unesco World Heritage List. That year, there was an Inter-Korean Historian Conference. It was there that I suggested that the two Koreas conduct a joint archaeological exploration at Manwoldae. Gyeongju, the capital of Silla; Seoul, the capital of Joseon (1392-1910); and Pyongyang, the capital of Goguryeo had all been attacked [during the 1950-53 Korean War], and the historical sites were damaged. But in the case of Kaesong, the stone foundations have survived relatively well, and I was certain that we would be able to uncover many Goryeo-era artifacts from underneath.

The project went through many ups and downs.

When you stop excavating a site, there is a high chance of corrosion and damage - just like opening a can of food and leaving it that way.

The project was in danger of being scrapped in 2008 when a South Korean tourist was shot dead by a North Korean solider near the Mount Kumgang resort. But the project was able to continue as we argued that cultural exchanges must go on regardless of the political situation - under the condition that the project would be “confidential.” It was again stopped in 2010 with the North’s sinking of the South’s Cheonan warship. It actually resumed the following year, but when Kim Jong-il passed away South Korean archaeologists had to again pull out of Kaesong.

This undated file photo of Manwoldae in Kaesong, in southern North Korea, shows the building foundations of the royal palace complex from the Goryeo Dynasty (918-1392). [JOONGANG ILBO]

As a scholar of ancient history, what are your expectations of Manwoldae?

The excavation of the structures in the western part of the palace will be finished in about two to three years. As a scholar I have high expectations about the excavation of the structures in the eastern part of the palace where there was Donggung, or the residential area for the crown prince, as well as a pond. Korean soil is acidic but where there is a pond it becomes alkaline. There tend to be many preserved relics in alkaline soil.

We’ve already discovered some very important artifacts, like a cylinder-shaped celadon vase as well as dragon-shaped architectural ornament, which we only knew about from historical records. But there is a high possibility that we may find a celadon roof tile.

The Chinese people made vessels and containers with the celadon technique. But the people of Goryeo went a step further. They were creative and made roof tiles with the celadon technique and built houses with them. There are already cases in which archaeologists found celadon roof tiles at the sites of ancient kilns. But there is a possibility that we will find more at Manwoldae. North Korean archaeologists also have high hopes about this possibility. There are historical records that the Goryeo people built houses with celadon roof tiles. But if we actually find them, we should be able to promote Goryeo’s creativity further to the world.

How did you induce the North’s participation in refuting Chinese claims that some histories of the ancient Korean dynasties are theirs?

Initially, North Korean scholars were hesitant. But one time, we all had drinks and I argued with them frankly, “How come you emphasize sovereignty so much and are also defiant toward the United States, but so cowardly toward China?” That’s when they said, “We will deal with Japan’s attempts to distort our history. You deal with China’s attempts.” So it was then [in 2004] that they began to make their ancient historical materials available. Before then, they didn’t make any information, like the murals of Goguryeo, available to us, but only to the Unesco people or Japanese scholars. The availability of these historical materials has really helped [us conduct further studies.]

In that sense, I guess the project at Anhak Palace was revolutionary event.

That is true. Before that, scholars from Japan and elsewhere didn’t pay attention to the North’s allegations [that the palace is from Goguryeo, not Goryeo]. But as we found concrete evidence, they couldn’t deny it. It was also since then that our studies of ancient Korean history [particularly that happened in what is today North Korean territory] have become more advanced than Japan’s.

What about North Korea’s studies of ancient history? What level are they at?

Until late 1950s and early 1960s, they were at a very high level. There were so many prestigious scholars like Paek Nam-hun, Park Si-hyeong and Kim Seok-hyeong. But since the late 1960s and 1970s, since the North emphasized the Juche ideology [which stresses self-reliance and nationalism], many of the renowned scholars were demoted or eliminated.

You have been exchanging with the North for the past 10 years. Do you believe the North is changing?

The biggest change I’m seeing is an increase of bicycles. In 2006, you saw carts being pulled by cows and horses in farming villages. But when I went there this spring, I saw lines of bicycles parked next to rice paddy fields. Also, I heard that many North Koreans working at the Kaesong Industrial Complex commute using bicycles. China also saw a rise in bicycles. They were replaced by motorcycles, and then by automobiles.

What are your plans for the near future?

Once the joint archeological exploration is over, we need to build a storage facility for all the relics. I also hope to see a museum built, so that more people can enjoy those artifacts. If Seoul and Pyongyang jointly operate the facilities, it has a potential to become a global tourist attraction, tied to the Kaesong Industrial Complex. When we first met with North Korean scholars, there was a significant distance between us.

But after 10 years, we have not only became closer but our perception of history has also changed somewhat. I’ve proposed to the North that we also jointly excavate Goguryeo murals and 10th-century castle built by Gungye (unknown-918) in what is now the demilitarized zone.