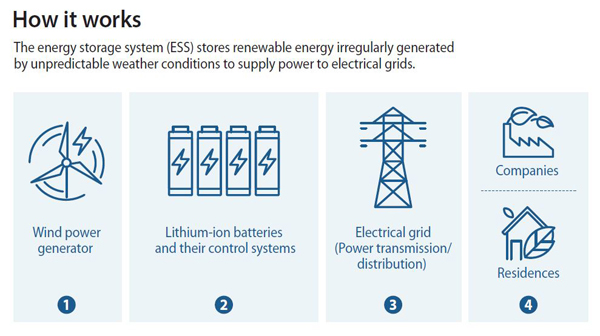 LG Chem, the nation’s leading battery maker, said on Tuesday that it will build an energy storage system (ESS) for the wind power plant in Yeongyang County, North Gyeongsang

The ESS will offer a power capacity of 50 megawatts per hour, which is capable of supplying electricity for 5,000 houses consisting of four family members for one day. It will be the biggest ESS in the world using lithium-ion batteries.

The ESS will store power irregularly generated from wind power due to unpredictable weather conditions and provide a stable electricity supply to the nation’s electrical grids.

The wind power plant in Yeongyang County was built by GS E&R and started operations in September.

LG said it plans to expand its cooperation with GS E&R and has agreed to build another ESS for a wind power plant to be built by GS in the future.

“This is a meaningful project for us since it will be the single largest ESS for a wind power plant, and we expect successful technological cooperation with GS E&R,” said Kwon Young-soo, president of the energy solution company. “We will try to expand our business territory in the ESS business in both Korea and export markets.”

“The ESS to be supplied by LG Chem will upgrade the Yeongyang plant since it will have the latest high-end tech,” a GS E&R spokesman said. “We expect synergy since we can offer industry-leading plant development and operation capabilities, while LG can provide excellent battery products.”