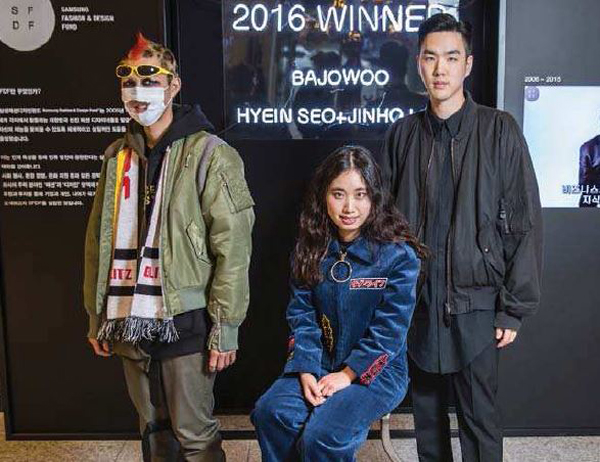 Designer Park Jong-woo and duo Seo Hye-in and Lee Jin-ho were named recipients of the Samsung Fashion & Design Fund award on Tuesday, a prize intended to find talented Korean designers and help them become global celebrities in the fashion industry.

This year’s ceremony was held at Samsung C&T’s flagship Beaker store in the posh Cheongdam area of Southern Seoul.

The recipients both received $100,000 and promises of promotional support from Samsung. Since its establishment in 2005, the fund has provided 19 teams $2.7 million.

This is the second time that Park, better known as BAJOWOO, has been named a recipient of the fund. The first was in 2014.

His strong brand identity and business prospects have called for a second win, according to Samsung C&T. His love for punk rock is reflected in many of his designs and unique personal aesthetic. He has recently collaborated with Mackintosh, Comme des Garcons and Camper.

The duo of Seo and Lee are both graduates of the Royal Academy of Fine Arts in Antwerp, Belgium, and work under the brand name “HYEIN SEO.” The brand is recognized by global retailers and overseas media thanks to its bold, trendy statement pieces. Their inspirations have come from movies and novels such as “The Catcher in the Rye,” which was the main theme for their 2015 S/S collection “Bad Education.”

The last time Park received the prize, the money went towards launching a new collection and creating a film to further cement the identity of his brand. This year, Park says he will spend the money on renting a new studio in Japan. He has been working in an empty storage room at his former college for the last two years.

Former recipients of the fund include Kye Han-hee of KYE, Steve J & Yoni and Doori Chung of Doo.Ri.