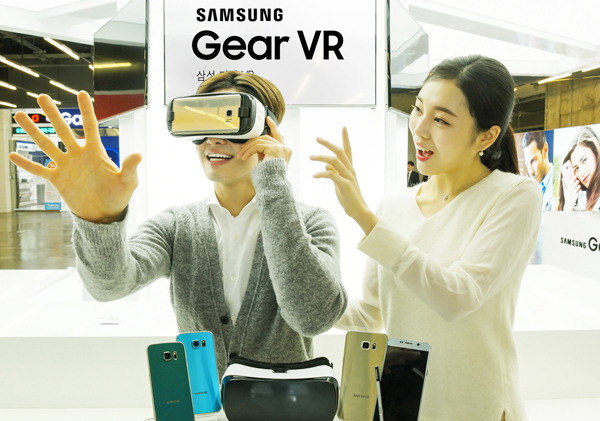 Samsung Electronics is making the purchase of a virtual reality headset more affordable for the average
consumer.

The nation’s biggest smartphone manufacturer announced on Tuesday that it is offering the Gear VR for 129,800 won ($112). The new product can be installed on all of Samsung’s latest smartphones and phablets, including the Galaxy S6, S6 Edge, S6 Edge Plus and even Note 5.

The new Gear VR offers a 360-degree panoramic view and has widened its viewing angle to 96 degrees. It is 19 percent lighter compared to its earlier model, at 318 grams (11 ounces). There is also an additional foam cushion for more comfort.

Gear VR owners can enjoy a variety of content provided on the Oculus Store, which include 360-degree photos and video.

For those more interested in K-pop, Korean singers’ performances onstage at CJ E&M’s M Countdown, a program on its cable music channel, Mnet, will be available for the device.

Content can be purchased at Samsung Electronics’ online store and its brick-and-mortar Digital Plaza store. It will also be sold at the online stores of Korea’s three telecommunication companies KT, SK Telecom and LG U+.

The company plans to promote the Gear VR by offering demos at KT&G Sangsangmadang in the Hongdae area of Seoul for three days starting this Friday.

“We hope that the Gear VR, with its lowered price, will help virtual reality headsets become more affordable for the general public,” a Samsung Electronics official said.