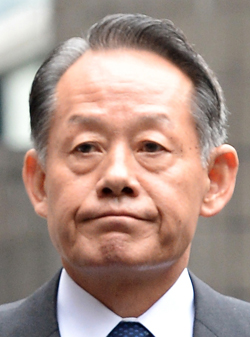 Prosecutors on Tuesday summoned former chairman of the Joint Chiefs of Staff Adm. Choi Yoon-hee to question him on his involvement in an alleged corruption case involving the Korean Navy’s purchase of Anglo-Italian Wildcat maritime helicopters.

The Seoul Central District Prosecutors’ Office called in the 62-year-old retired admiral to investigate whether he was involved in the Navy’s fabrication of reports leading to the selection of the AW159 Wildcat multi-role helicopters and if he received bribes from an arms broker during the process.

Choi is the highest-ranked military official to be summoned by prosecutors since former Defense Minister Lee Yang-ho, who was involved in a defense procurement scandal in 1996.

The retired admiral was the first Navy chief of staff to become chairman of the JCS in 2013 and ended his term in October, just 48 days ago.

The Wildcat, produced by the Anglo-Italian company AgustaWestland, was selected to replace Korea’s Lynx helicopters, produced by the same company, in January 2013 over the American Sikorsky’s MH-60R Seahawk.

Earlier this year, a joint governmental investigation team tasked with uncovering irregularities in the defense industry accused a group of naval officials of filing a false assessment report on the AW-159 Wildcat helicopters. Seven current and former military officials have been indicted for fabricating reports on the Wildcat’s operational capabilities.

Three Navy officers in May insisted that they drew up the false report upon orders from their superiors. Consequently, Park, a rear Admiral in the Navy, was arrested in June for fabricating evaluations of a helicopter in return for bribes, though the model actually did not meet the operational specifications required by the Navy. Park testified that Choi had been in charge of the Wildcat procurement project.

At that time, Choi was Chief of Naval Operations and the highest authority to select the helicopter model.

Prosecutors said that Choi during this period had numerous contacts with the head of an arms broker only identified by the Korean surname Ham.

In September, Choi’s 36-year-old son was questioned over allegations that he received 20 million won ($17,332) from Ham and later returned 15 million won. The money is suspected of being linked to the Wildcat deal, though Choi’s son testified to prosecutors that the money was unrelated to his father and that he had borrowed it for personal reasons.

The former JCS chief has denied the allegations.

He said that when he was Chief of Naval Operations - during the period in which the Wildcat helicopter model was procured - he had no knowledge of the fabrication of reports.

Choi also said he was not aware of his son receiving 20 million won from Ham.