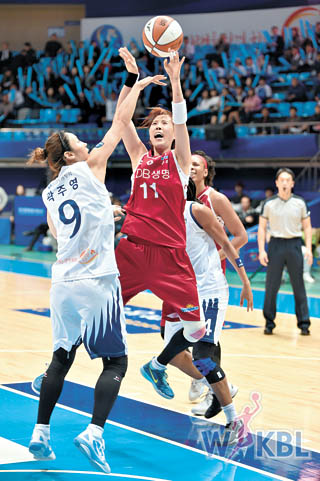 Minutes after the starting whistle was blown, fans couldn’t believe their eyes. Was this really a game between two of the top teams in the Women’s Korea Basketball League?

Monday’s matchup between the Incheon Shinhan Bank S-Birds and Guri KDB Life Winnus at the Dowon Gymnasium in Incheon should’ve made for an exciting night. Both are traditional powerhouses and include national team members like Lee Kyung-eun and Kim Gyu-hee.

But there were so many turnovers and poor shots that the only thing compelling about the game was how bad things could get.

The S-Birds won 54-48, and now share second place with Bucheon KEB Hana Bank at four wins and three losses in the WKBL.

Even the ostensible accomplishments were marred by embarrassment. The S-Birds grabbed a season-high 51 rebounds, but only because nobody was making their shots - often missing both the board and the net.

Frequent turnovers committed by both teams also interrupted the rhythm of the game, with the S-Birds marking 20 and the Winnus making 11.

Analysts said Monday’s game is just one example of the shamefully low quality of the competition in the WKBL, but things don’t appear to be getting any better than last season.

As of Tuesday, all six teams in the WKBL have played seven games each, and the S-Birds are the worst in turnovers, averaging 16.30 per game. Although only one-fifth of the season is completed, this is nearly four turnovers more than last season’s worst performer Winnus, which averaged 12.60 turnovers per game.

This isn’t only a problem for the S-Birds. Others teams are also averaging at least 13 turnovers per game, with exception of the league-best Chuncheon Woori Bank Hansae, which is averaging 10.7.

Some analysts say the slide in performance is due to an overreliance on foreign players, which leads Korean players to be complacent.

“Local players’ are not improving, which is standardizing poor quality in the league,” said Cha Yang-sook, an analyst for KBS N Sports. “They had good weight training and stamina, but their sense of the game isn’t getting better.”

Foreign players, on the other hand, continue to put in work.

“As teams try to attack mainly with foreign players, there is no space left for local players,” said Cha. “Local players need to at least find their roles and execute them, but that’s not what we see happening.”

But some of the poor performances could be growing pains stemming from a recent change to WKBL rules.

This season, the WKBL has readopted the so-called 14 second rule for the first time since the 2011/12 season. The regulation means that when an attacking team regains possession of the ball after a player’s shot touches the rim, the team is given 14 seconds to score instead of 24 seconds. This was intended to increase the average scores in games and push teams to attack quicker.

Cha previously predicted it could lead to more turnovers since players will try to rush their attacks, but didn’t know it would produce this many errors.

“Before the opening of the season, I didn’t really expect that teams would be able to perform at this level of basketball,” she said. “There are not many talented players who can score in 14 seconds.”