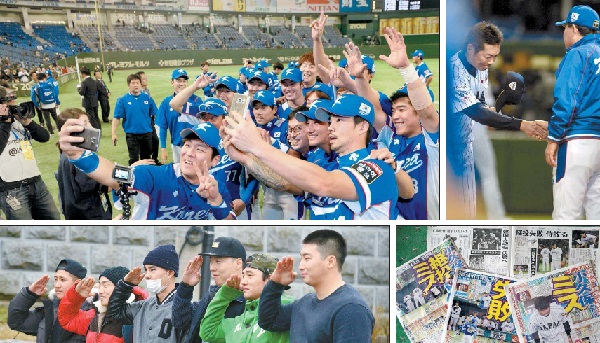 Korea became champions of the Premier 12 tournament last week after beating the United States 8-0 in the final game.

Including a dramatic 4-3 victory over Japan in the semifinal - highlighted by four-runs in the final ninth inning, Korea’s outstanding performance at the inaugural baseball tournament staged by the World Baseball Softball Confederation once again emphasized the popularity of baseball across the nation.

While the events on the field were reported and viewed in detail, there were a number of less publicized incidents that are worth noting. JoongAng Ilbo takes a look at 12 episodes in and around Korea’s victorious run during the last two weeks.

Before the semifinal started on Thursday, Korea national team manager Kim In-sik walked about 50 meters from the dugout to home plate to exchange the lineup card with Japanese manager Hiroki Kokubo.

Kim has difficulty walking after he suffered a stroke 11 years ago and coach Kim Pyung-ho has been exchanging the lineup card with opponents during the tournament. This was first time the 68-year-old manager confronted an opponent’s manager to hand over the lineup card.

Despite his age, Kim has been showing his health in the hectic and frequently-changing schedule, and moving around cities such as Seoul, Sapporo, Taipei, Taichung and Tokyo during the two week event. Players said they were inspired by Kim’s commitment.

Manager Kim doesn’t normally believe in good omens before a game, but this time he relented.

But it didn’t stop there. Kim on Friday again visited the restaurant and ate seafood soup, a day before the final against the United States.

“Well, I tried to order another [food], but I had this uncomfortable feeling and ate seafood soup again,” Kim said on Saturday. “But as I continue to eat the soup, it kind of loses its appeal (laughs).”

Regardless, the soup has given him the taste of winning.

On Friday at the team’s voluntary training session for the final, Kim Hyun-soo appeared at the Tokyo Dome with five teammates.

While local reporters asked about his future destination, since he becomes a free agent from Doosan Bears, Kim answered that he will go overseas if the conditions are met. But later, the 27-year-old asked reporters to not to write his story until the final is over and emphasized that this isn’t his official announcement for going to the Major League Baseball. Now the team has won the title, his price may have just gone up.

Korean players normally put the national flag on the mound after victory, but for the final, the taegeukgi was kept under wraps. Jeong Geum-jo, the operation division chief at the Korea Baseball Organization asked the team before the final not display an exuberant celebration if they won, because of the international mourning after the terror attacks in Paris.

Team captain Jeong Geun-woo also stopped young players from preparing a taegeuki ceremony, saying it was not a good idea to provoke Japanese fans at Tokyo Dome, which is considered the heart of Japanese baseball. After the victory, Korean players enjoyed a simple celebration, taking selfies and slapping high-fives. Some local baseball fans didn’t agree with the idea of a simple celebration just because it may offend Japanese fans.

In the final, Nexen Heroes’ Cho Sang-woo was the last pitcher for Korea to seal the game. Originally Lee Hyun-seung, who was also last pitcher when Doosan Bears won this year’s Korean Series, was set to be on the mound.

But since the 8-0 score so large, and following baseball etiquette, manager Kim decided not to switch pitchers in the final moment.

Oh Jae-won is disliked by the fans of some rival teams because of his aggressive behavior on the field. But when Oh is on the national side, the 30-year-old infielder can be a beloved player who can sacrifice for the team.

Before the quarterfinals against Cuba, Oh served as a pitcher for batting practice since the national team ran out of hands. He later bought samgyeopsal (pork belly meat) for the hitters.

In the semifinal, Oh was leadoff batter in the ninth to start Korea’s dramatic win over Japan. He has now earned new nickname: “Oh, the
Martyr.”

In Japan, Korean players stayed at a luxury hotel in Tokyo. But when they had free time, they visited Korean restaurants nearby and “Big Boy” Lee Dae-ho paid all the bills.

“I became the senior player, so I tried to buy some food for players, but I couldn’t catch Lee,” said catcher Kang Min-ho.

The Premier 12 is finished, but Na Sung-bum can’t rest. The 26-year-old outfielder joined the national team two days after playing in the KBO League playoff with his club NC Dinos and finally returned home for the first time in four weeks when the team returned home on Sunday from Japan.

However, just a day later, Na headed for more national duty. He was one of six players who began their basic four-week military training on Monday.

And the day after he is released from military training, he will have a wedding ceremony with his wife on Dec. 19. Na already has a son and got a married last year, but the couple didn’t have a ceremony.

Led by former Lotte Giants manager Kim Si-jin, the analysis unit of the national team has been one of the top contributors to Korea’s victory.

From the qualifying rounds in Taiwan, Kim never met the team, but moved around to observe other teams.

“It would have been difficult to get data from South and Central American players,” said KBO’s Jeong. “With frequent entry changes, they worked hard to prepare the data until the final night. They are the hidden heroes.”

The KBO said that excluding taxes, half of the tournament prize money of $1 million will be used to pay for the operation cost of the event, and rest of the money will be given to the team. Including coaching and supporting staffs, there are about 50 members in the national team, which means that each of them can get about 10 million won.

In the 2009 World Baseball Classic, where Korea finished runner-up, players received 67.85 million won as a bonus. Under the code, national team members also get a daily payment while on duty. While the manager can earn 150,000 won per day, coaches get 100,000 won and players receive 80,000 won.

In almost every game, scouts from Major League Baseball clubs watched players from Korea and Japan. For Korea, after the success of Pittsburg Pirates infielder Kang Jung-ho, big league scouts have been watching local players closely, in particularly those who announced big league bids.

Park Byung-ho, who is in talks with Minnesota Twins after getting posted, showed his power in the final with a three-run home run, and the Japan Series MVP Lee Dae-ho delivered a clutch hit in the semi-finals. Kim Hyun-soo also drew big interest by winning the tournament MVP. Son Ah-seop went 4-for-11 in this tournament, but his posting result on Tuesday showed he failed to get any offers from the MLB.

Attendance at the Premier 12 was mixed. The semi-final between Korea and Japan had an average TV rating of 25.2 percent in Japan, while more than 40,000 tickets were sold for the third-place and final games.

For the opener between Korea and Japan, a total of 28,848 fans attended the Sapporo Dome.

But excluding games involving hosts Japan and Taiwan, the average attendance in the qualifying rounds was only 789. In the game between Netherlands and Italy, only 119 fans attended.

Experts said that if Taiwan, co-host of the event, reached the quarter-finals, the popularity of the event would have been greater.