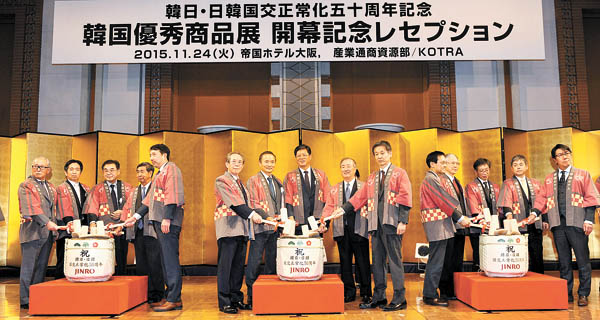 Korea Trade-Investment Promotion Agency CEO Kim Jae-hong, eighth from right, business leaders and government officials from Korea and Japan celebrate the opening of the 2015 Korean Expo Osaka during a reception held at the Imperial Hotel in Osaka on Tuesday. [KOTRA]

OSAKA, Japan - A government-backed expo featuring made-in-Korea goods from over 100 Korean companies and more than 1,000 Japanese buyers kicked off on Wednesday in Osaka, as Korea aims to rekindle its previously robust exports to Japan.

The three-day 2015 Korean Expo Osaka, arranged by the state-run Korea Trade-Investment Promotion Agency (Kotra), comes three weeks after leaders of the two allies had a landmark summit in Seoul to thaw bilateral relations that have been frozen over the past three years. This year also marks the 50th anniversary of Korea and Japan normalizing diplomatic relations.

One hundred and four Korean companies seeking trade partners and a stronger foothold in Osaka have installed booths in over 1.7 acres of the Intex convention hall. The participants consist of producers who make consumer goods, including cosmetics, beauty products, accessories and processed food.

“We have opted this time to place emphasis on consumer goods that are easily accessible to the general public as we wish to make breakthroughs in the Japanese market, which has turned conspicuously sluggish recently,” Kim Jae-hong, CEO of Kotra, said in a press conference on Wednesday.

The state-run trade agency hosts Korean goods expos worldwide - some routine and some on special occasions - based on different themes.

Kotra chose Osaka as the event’s location for several strategic reasons. Kansai, the southern central region in which Osaka is located, has since ancient times actively traded with Korea and has the largest ethnic Korean population in Japan, according to the Kotra CEO.

More practically, the region has a history of successfully advancing Japanese companies into the broader Korean market. Of the 900 companies that have advanced into Korea, 190, or 27 percent, are from Kansai, said Kobayashi Yoichi, general manager at the international relations department of the Kansai Economic Federation. 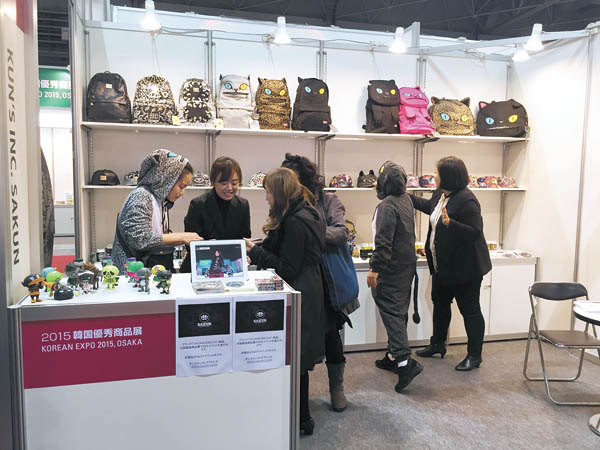 Japanese buyers swarm to the booth of Kun’s Inc. at the 2015 Korean Expo Osaka, held at Intex in Osaka on Wednesday. The company is one of the 104 Korean participants in the exhibition. [SEO JI-EUN]

Most of the participants are small, obscure companies but are still armed with innovative products with potential appeal for Japanese consumers.

The booth for designer Kun’s Inc. drew a number of buyers with backpacks, clothing and smartphone accessories branded with its signature Smile Cat, which resembles a character in Hayao Miyazaki’s 1988 animated film “My Neighbor Totoro.”

The 16-year-old company, currently running a store in Seoul’s bustling Myeong-dong area, last signed an export deal to Japan in 2012. It is returning after seeing its products gaining popularity among Japanese tourists, said Hwang Song-ju, a manager at Kun’s Inc.

MyrrhTech, a cosmetic soap producer, is targeting Japan after successfully advancing into China and Hong Kong with a facial cleanser that removes all makeup - even waterproof eyeliner and lipstick - in a single step. The WelBas IceCreamSoap comes in different “flavors” and colors depending on skin type, and its packaging resembles a classic ice cream container.

“Given how Korea and Japan have both overcome economic crises through technological innovation, developing new markets and aggressive overseas marketing, I am sure both will be able to achieve a win-win situation by sharing know-how and stepping up cooperation in many other fields,” said Kim of Kotra.

Korea’s once-strong exports to Japan have lost momentum in the past couple of years as diplomatic ties between the two have gotten frostier. Since normalization in 1965, bilateral trade volume has exploded by as much as 390 times, but the growth momentum has been on a downward slide after reaching a peak in 2011.

Notably, Korea’s exports to Japan shrank 21.1 percent in the first 10 months of this year from the same period a year earlier to $21.5 billion, which resulted in Japan falling to the fifth-largest export market for Korea, down from the third largest. The ever-weakening Japanese yen has also dealt a blow to the Korean exporters. Exports of oil products including refined petroleum to Japan, in particular, more than halved over the past year.

Sempio, a leading soy sauce and condiment producer, has also been hit hard. Japan was one of its top five export markets until three years ago, but now its presence has become minimal.

“We hope to take this expo a chance to reverse the situation in Japan, which is still a crucial market for us,” said Michael Kong, general manager of the overseas sales team at Sempio.