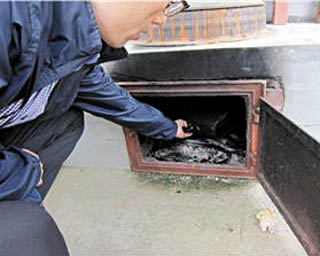 A National Tax Service agent pulls a bag filled with cash from the furnace of a home owned by a tax evader. [NATIONAL TAX SERVICE]

Early last month, a squad from the National Tax Service (NTS) stormed into the luxurious Gyeonggi home of a tax evader surnamed Suh.

The 50-year-old was suspected of avoiding taxes on profits he’d made from auctioning a piece of property, converting the money he’d made into cash through several money-laundering schemes.

As the agents burst through the door with the help of local police, Suh quickly stashed a bag of cash into a traditional Korean furnace. The team searched every corner of the house, and was about to give up when one member happened to spot something. He reached into the furnace, withdrawing a bag containing thousands of dollars in 50,000-won notes and $100 bills amounting to 600 million won ($77.4 million).

This was just one of the many bizarre cases of recent crackdowns on tax evaders who have owed the government more than 500 million won for more than a year. 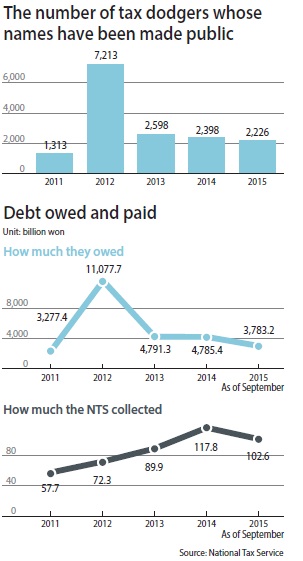 On Wednesday, the NTS unveiled the personal information - including the names and addresses - of 2,226 companies and people that have evaded taxes this year. Most were individuals, at 1,526

The agency said the tax evaders owed the government a total of 3.78 trillion won, or an average 1.7 billion won each.

So far, the NTS says it has collected 2.3 trillion won.

In another recent case, 10 NTS agents raided a golf club in the greater Seoul area where they found 200 million won in cash after prying open a vault in the clubhouse.

The 40-year old owner of the club, surnamed Kim, hid money all over his property, including in caddies’ lockers and desk drawers.

When his business began to suffer due to a recent management dispute, Kim encouraged golfers to pay in cash to avoid taxes. After receiving tips that the green fees paid in cash were being placed in vaults instead of banks, the NTS agents stormed the golf club on a Monday, when they would be fullest thanks to weekend golfers.

One of the most common characteristics of those evading taxes is a penchant for luxury, the NTS reported.

There was the case of a businessman surnamed Lee, who owed the government taxes. Despite the debt, he had 1,200 bottles of expensive wine, 30 fancy women’s handbags, two sets of golf clubs and large amounts of U.S. dollars in cash at his luxurious house in the posh neighborhood of Seongbuk-dong, Seoul.

He had purchased the home through a paper company created in the United States to throw the NTS off his trail.

In another instance, the agency confiscated 500 expensive pieces of art from an art dealer who owed the government 1 billion won from his profits. The man hid the pieces in an unregistered storage room after falsely trying to claim bankruptcy.

In July, the former CEO of Bluenier - an outsourcing company specializing in the maintenance of the Korean Air Force’s fighter jets - was sentenced to six years in prison and a 3 billion won fine for falsifying documents and pocketing almost 25 billion won between 2006 and 2011. Those profits included 17 billion won from importing expensive components for the KF-16 fighter jets that were actually cheap counterfeits.

He was sentenced to an additional two and a half years and 4.7 billion won fine for tax evasion charges earlier this month.

The NTS said majority of the large-sum tax evaders were in their 40s and 50s and lived in the greater Seoul area, including Incheon.

Among the companies, C&H Chemical - an SME based in Bucheon, Gyeonggi - owed the government the most, with 49 billion won in unpaid transportation, energy and environment taxes.

“We gave those on the list an additional six months to explain their situation, after we first informed them that their names would go public in April,” a NTS official said. “We have taken down the names of those who paid more than 30 percent of the taxes they owed or those whose unpaid taxes shrunk to less than 500 million won after some portion was paid.

“We ask the public to actively participate in finding such tax dodgers with ill intent.”

Since 2004, the government has been posting the names of individuals and companies that owe more than 500 million won or have repeatedly broken tax laws on the agency’s website.

But since the program began, its standards for what deserves the public shaming have fallen. At first, the list only contained those that owed the government more than 1 billion won and have failed to pay taxes in the last two years, falling to 700 million won in 2010. The standard loosened further in 2012, to 500 million won and failure to pay within a year.