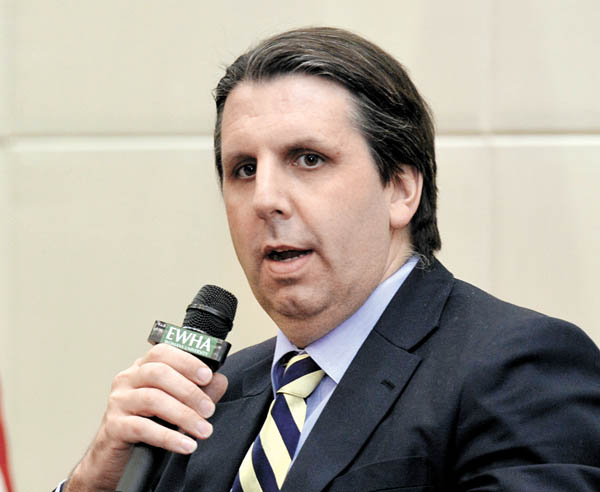 Three Korean entrepreneurs and venture capitalists who participated in the latest Global Entrepreneurship Summit (GES) were invited Wednesday to the U.S. Embassy in Seoul to share with Ambassador Mark Lippert their experiences in Nairobi, and to talk about the startup ecosystem here.

Five Koreans were sponsored by the embassy to attend this year’s convention, held between July 25 and 26 in the Kenyan capital. Launched in 2010, the annual forum brings together entrepreneurs, venture capitalists, business leaders, mentors and government officials to deepen engagement and strengthen worldwide entrepreneurial communities.

The initiative was U.S. President Barack Obama’s, when a speech he made in Cairo in 2009 stressed the importance of entrepreneurship as a tool for economic development.

“What’s so interesting about this space [GES] is that people compete ruthlessly but they also share ideas, and the ideas have spill-over affects,” said Lippert.

Byeon Yoon-ji, CEO of Packmanz, stressed the “synergy effect” between other entrepreneurs as the greatest aspect of participating in the GES.

“Half of those who participated were from Africa, and they were mostly social entrepreneurs,” said Byeon, whose company provides low cost, speedy delivery services to users by connecting them with travelers who have unused luggage space. When someone wants to buy something from a foreign land, a traveler to that country purchases the object on his or her behalf and brings it back.

“A representative from a Malawi-based NGO asked me whether I could transfer soaps. Soap itself is cheap, but the delivery process can be costly in Malawi,” Byeon continued.

Kim Yong-kyung, CEO and cofounder of ChattingCat, which provides real-time linguistic correction services for nonnative English speakers, explained how the local government’s support to startup companies like hers was attracting foreign capital.

“The government made it more appealing [to do business in Korea] for outsiders,” said Kim. “[My foreign business partners] tell me they think it’s a good time to enter the Korean market and asks whether I know any cool Korean companies.”

Kim Hyung-soo, president and CEO of Tree Planet, stressed that this renaissance period for local startups should help ease youth unemployment. Kim’s company has helped NGOs around the world plant 500,000 trees in 10 different countries through an online game.

“Korea has many conglomerates, but they can only hire so many new recruits each year,” he lamented.

When asked how the sponsorships directly helped the U.S. Embassy in Seoul, Lippert focused on future planning. “I think it would help expand approaches and outlooks and [boost] collaboration among Koreans, among Korean-Americans and people in Korea and in the United States,” he said.