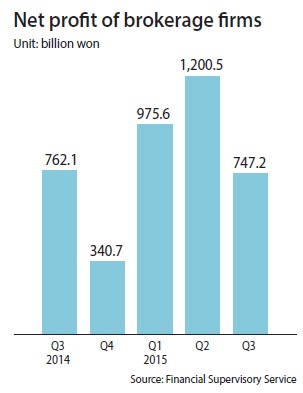 Earnings plunged at securities firms in the third quarter due to losses from derivative products, while asset management companies saw their highest earnings in nearly six years.

According to reports by the Financial Supervisory Service on Wednesday, securities companies’ earnings tumbled 38.7 percent during the July-September period due to huge losses from derivatives.

The total net profit of 56 brokerage firms stood at 747.2 billion won in the third quarter, the report showed. The figure posted 1.2 trillion won ($1.05 billion) in the second quarter.

Such weak performance was attributable to a 69.4 percent plunge in their proprietary trading income, largely because of losses from derivative products such as ELS amid volatile stock market conditions.

According to the watchdog, 46 companies were in the black for the period, while 10 suffered combined losses of 22.4 billion won.

A total of 87 asset managers recorded 154.9 billion won in combined net income in the third quarter, up 4.4 percent from the previous three months.

Gains from fees and commissions were 433.6 billion won with a slight increase in assets under management despite a fall in discretionary advisory service fees.