VWs are hot once more thanks to big discounts

VWs are hot once more thanks to big discounts 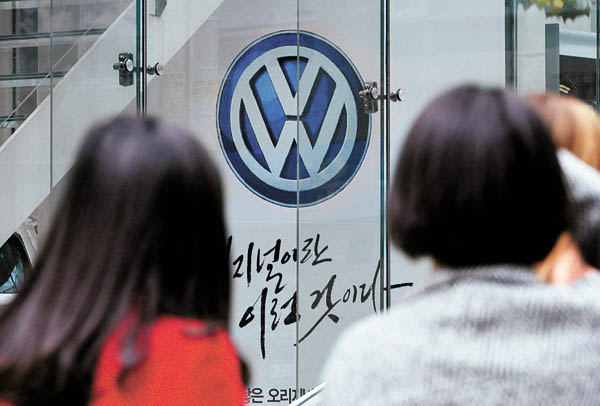 A Volkswagen dealership in Seoul on Wednesday. The German automaker’s reputation was tarnished by an emissions rigging scandal. [NEWSIS]

The Mapo District Volkswagen dealership in western Seoul was deeply worried when an emissions rigging scandal hit headlines in October.

The worries are receding, and the scandal has been combated with the most basic of car-selling strategies: discounts.

Customers have heard about the good deals and don’t want to lose out. On a recent visit, potential customers visiting the shop had to wait to talk to a dealer.

“We’re very sorry to say this, but could you please wait for about 15 to 20 minutes?” a dealer at the Mapo District dealership said to a woman interested in discounts on a Jetta sedan. “Please take a look at these brochures, and I’ll be back as soon as I can. But bear in mind that we don’t have many units left of popular models like the Passat and Jetta.” 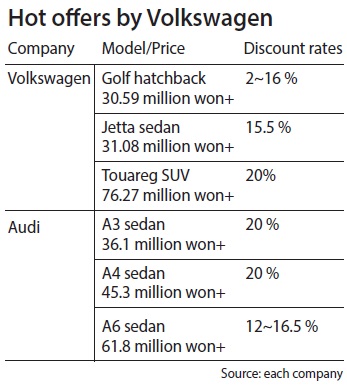 Last month, Volkswagen saw its sales plunge in Korea due to the scandal, which showed that diesel models were rigged to report lower emissions. The company sold 940 cars in October, a 67.4 percent fall from September’s 2,901 units. That figure is expected to bounce back dramatically this month, thanks to aggressive discounts offered by the German automaker.

According to multiple sources, November sales for Volkswagen Korea will surpass 3,500 units, which will be an all-time monthly high since the Seoul office was established 10 years ago.

This month, the company has been running discount promotions of 10 to 20 percent on popular models including Passat and Jetta sedans, as well as the Touareg SUV. Other than the discounts, the company also offers either a five-year or 120,000-kilometer (74,600-mile) warranty for all of its 17 models. About 1,000 cars were sold in the week after the company announced the promotions.

“We sold a total of 255 Passat sedans in the first week, and it looks like we don’t have more in stock,” said a dealer at Volkswagen’s Bangbae-dong dealership in southern Seoul. “If you are considering buying a Jetta, we only have one brown unit left, and the Touareg SUV is currently not available.”

The starting price for a Volkswagen Jetta is 31.04 million won ($27,100), but with a 15 percent discount and lowered individual consumption tax, customers can buy the vehicle for under 29 million won, which is the same price as a high-trim Hyundai Motor Sonata LF sedan.

“Sales for this month will definitely improve, though we haven’t collected data yet,” a Volkswagen Korea spokesman said.

“Since the scandal, dealers worried so much since only a couple of customers visited shops per day,” a Volkswagen dealer said. “We were curious why they stayed away because we didn’t think Korean consumers cared much about environmental issues. Now that they’re coming back to our shops, we realize that the only thing that matters in buying products, particularly a luxury good like an imported car, is the price. They don’t even ask whether the Jetta or Passat are safe to buy. ”

But the future is another matter. The company said the discounts are only for November.