My five decades with Kim Young-sam

My five decades with Kim Young-sam 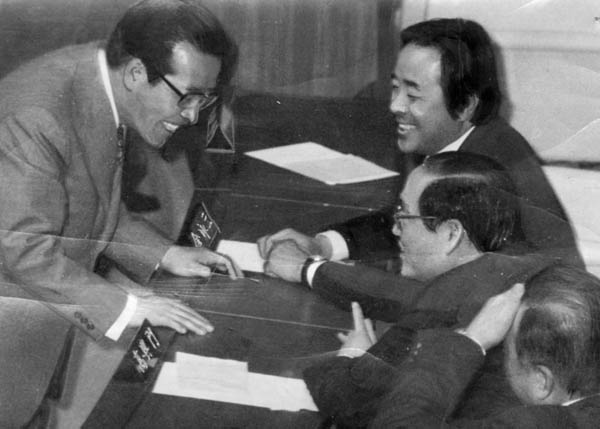 Kim Jong-pil, left, greets opposition leader Kim Young-sam, far right, during a regular parliamentary session at the National Assembly on March 12, 1976. Kim Jong-pil was the only lawmaker in the ruling party who opposed Kim Young-sam’s expulsion from the assembly in 1979. [KIM JONG-PIL]


Former President Kim Young-sam and I both led political lives marked by ups and downs. Through more than five decades in politics, we had good times and bad in our relationship. Sometimes we were friends aiming for the same objective. At other times we totally disagreed.

Kim, who passed away Sunday, had a very different political background from me. While our political career differed, we were in the same boat trying to lead the nation into an uncertain future. After we both retired from politics, a sense of friendship settled over our long-running relationship. Following the death of President Kim Dae-jung in 2009, Kim Young-sam is now gone. I am the last of a trio known for decades as The Three Kims of Korean politics. I interpret this as God’s plan to use me as the final one to wrap up the work of the three Kims.

I do not know what my last mission will be. It could be my own examination of my political career and identifying the regrets I have for things that could have been done better. Or it could be my satisfaction with what I have accomplished with the two other Kims, although nothing is ever done perfectly.

I never imagined that I would be the last one of the three Kims. I was overwhelmed with emotion staring at the portrait of Kim Young-sam at his mourning altar. 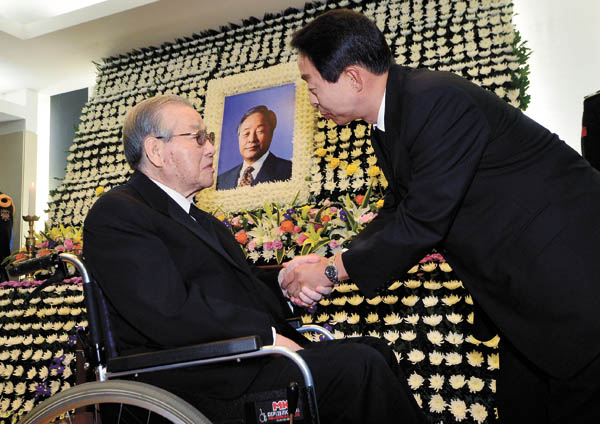 I met him for the first time in 1962, a year after the May 16 revolution (coup). As head of the Korea Central Intelligence Agency, I was secretly working hard to create a political party to back Park Chung Hee. I was trying to recruit young bright minds into the party from throughout the country. Of the young politicians in their 30s, Kim Young-sam was mentioned. He was already in the national spotlight for having been elected to the Assembly in 1954 as an opposition lawmaker at the age of 26. He was the youngest representative ever.

To recruit him to the Democratic Republican Party, which was still in the making, I met him in my office at the intelligence agency. I told him, “Let’s combine our strength to make the country better.” He turned me down flatly. “There will be no development if all political power is swept up by the military group,” he said. “There must be a group that opposes it. In that regard, I will stay on my political course.”

It was a rare politician who could express his opposition to the revolutionary force right in front of its intelligence chief. I decided to respect his courage and the faith he already had in his political career. I simply told him to have a drink with me with no strings attached. My first impression of Kim Young-sam was that he was not an ordinary man but a man of stubbornness. But he was also a man who could not lie to others.

The 1960s passed and we were in the 1970s, a period marked by the Yushin era and struggle [for democracy]. The opposition was largely shaped by two forces, one led by Kim Young-sam and the other by Kim Dae-jung. Kim Young-sam controlled the largest opposition New Democratic Party (NDP) while Kim Dae-jung was leader of the opposition outside the legislative circle.

In October 1979, the ruling party moved to expel Kim Young-sam from the National Assembly, which it did. I was the only one in the party who voted against his expulsion. It was an irregular vote that was arranged without the knowledge of Kim’s party. The Assembly had no history of expelling the head of the opposition party. When the motion to expel Kim was proposed in the name of President Park Chung Hee, I stood to object. “Even if it was ordered by President Park,” I said, “there are things that just can’t be done.” In the voting booth, I stamped nay. But the Assembly speaker announced that all 158 attending lawmakers had approved the expulsion.

What provoked the ire of the Park government was Kim’s interview with The New York Times a month before in which he demanded Washington halt aid to South Korea until Park accepted democracy. While his action deserved criticism, it wasn’t grievous enough to deserve expulsion from the assembly, which violated common sense and legislative principles. Kim Young-sam, who began his career in the legislature at 26, had a firm belief in the parliamentary system. Even after he was expelled, he didn’t appear threatened at all. I could read his courage in his famous saying, “The morning still comes even if the rooster is strangled.”

At the same time, I also worried about him. A few days after he was expelled, I tried to console him and apologize for what the party did to him. I also let him know I voted against his expulsion.

Then the fateful Oct. 26 assassination of Park Chung Hee took place. As I was beginning to greet guests at the mourning altar set up at the Blue House on Oct.28, Kim came to pay his respects early. I was grateful that he came. We shook hands firmly. I believe through such acts we exchanged and confirmed a sense of friendship.

In the 1980s, Kim Dae-jung and Kim Young-sam were both subject to persecution by the Chun Doo Hwan government. It was a reflection of his unfaltering courage that he led the efforts to create the Council for the Promotion of Democracy in 1984 with support from Kim Dae-jung. He sent an aide to my house to ask for my participation in the pro-democracy group. I politely turned it down. Though all three Kims were in the same boat in our struggle, I could not take the same path as the two Kims in the struggle for democracy. As a man who had supported the late President Park, I thought I could not be in outright opposition to Chun Doo Hwan and his supporters, who had risen through military ranks on President Park’s watch.

Twenty years earlier, Kim Young-sam turned down my request that he join the Democratic Republican Party, and here I was turning down his request to join his party.

After years of marching on different paths, we came together to merge our parties with the ruling party of President Roh Tae-woo on Jan. 3, 1990. Kim Young-sam realized he needed to join hands with Roh in order to defeat Kim Dae-jung in the 1992 presidential election. His approach was bold no doubt, which was well illustrated in his famous saying: “You need to enter a tiger’s den in order to hunt one.” The merger of the three parties had many complications and soon led to a struggle for power. But Kim was relentless in pursuing his ultimate goal of winning the presidency. His firm resolve to win the highest office was shown when he demanded then-President Roh take the honorary chairmanship of the party while he took effective control of it as chairman.

Both Kim Young-sam and Kim Dae-jung lived their political careers with tenacious resolutions to lead the nation as president. While the two shared the same goal, each had his distinctive characteristics. Kim Young-sam was capable of solving complex issues as if they were simple ones with an ability to react quickly. His speech was straightforward and intuitive. For Kim Dae-jung, his way of thinking was based on logic and reasoning. He stressed the importance of persuasion through logic after hours of meticulous contemplation.

In April 1992, I met with President Roh and agreed to endorse Kim Young-sam as the party’s presidential candidate. I headed straight to meet Kim at the Hyatt Hotel. I told him, “It only makes sense that you become the next elected president. I will support you to make up for all suffering that was done to you under the Park Chung Hee government.” I will never forget the wide smile on his face as he listened to me.

Kim Young-sam moved swiftly to introduce a package of major reforms to the country including the real-name financial system and dissolution of the military clique Hanahoi, which was notorious for its factional influence in the military. In 1996, he charged former presidents Chun Doo Hwan and Roh Tae-woo with treason and mutiny for their Dec. 12, 1979 coup.

I believe none of these actions could have been possible if it were not for Kim. I was impressed with his strong leadership in righting injustices. Memories of our political disagreements have all become part of fonder memories. I decided to leave his party in January 1995 and create my own. Kim later said in his memoirs that he felt really sorry losing me. I believe he meant it.

The era of the Three Kims ended long ago. People called us Class-9 politicians, a reference to the highest level in the game of go. I once said that to be a veteran politician, one needs to be adept at trickery. I may have simplified too much. To be a statesman, one needs to have a profound level of ability and experience in running a nation. And Kim was a man who possessed all such necessary skills. He was elected to the presidency because he deserved it. He did not miss his chance to become one with history. He never stumbled in the face of overwhelming challenges. Kim’s political life was marked by success and failures and his contribution to the country and history will always be remembered by the people. I wish for him to rest in peace.