Politics aside, Kim will be remembered for joy of football

Politics aside, Kim will be remembered for joy of football 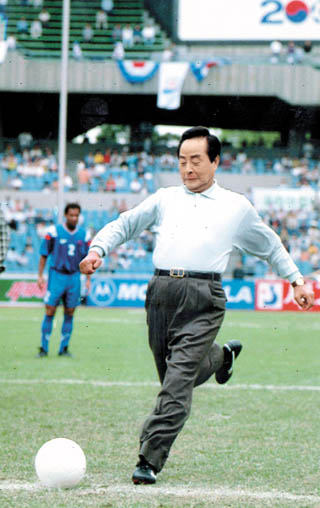 Former President Kim Young-sam, who died Sunday, was an icon of Korea’s democracy movement, but the sports community will also remember him as the president who enjoyed
football.

Kim’s trademark sport activities included jogging and hiking, but he was a footballer when he attended Tongyeong Middle School in South Gyeongsang.

During his time as the 14th president, one of his biggest achievement in sports was drawing the winning bid for the 2002 FIFA World Cup in 1996, when the country was named as co-hosts with Japan.

Hosting the 2002 FIFA World Cup was one of Kim’s promises during the presidential election campaign in 1992. But after becoming president, his relationship with the Korea Football Association became awkward.

In 1993, Chung Mong-joon was also elected president of the KFA. Chung, 64, is the sixth son of the late Chung Ju-yung, the Hyundai Group founder who ran against Kim in the 1992 presidential election.

Chung Ju-yung, who died in 2001, later got indicted for creating a slush fund in 1993, while many of his Hyundai Group affiliates faced tax investigations during Kim’s term. Because of this, it was said that Kim didn’t like Chung’s son taking charge of the country’s top football governing body.

“Then Minister of Culture and Sport Lee Min-sup told me I should have deep consideration because President Kim Young-sam is displeased with me being KFA President,” Chung Mong-joon wrote in his 2011 autobiography, “My Challenge, My Passion.”

Despite the uncomfortable relationship with KFA chief Chung, Kim knew that hosting the World Cup would be critical to raise the image of the country. After the bidding committee was founded in 1994, Kim supported the campaign as much as he could, even meeting then FIFA executive members at one point.

“President Kim supported actively the campaign for the 2002 World Cup and also gave me a Grand Order of Mugunghwa,” said Chung Mong-joon after visiting Kim’s memorial altar on Sunday. “I personally think I have received great affection from President Kim.”

Kim also attended various football matches in the mid-1990s that were designed to promote Korea’s World Cup bid. He visited stadiums when the Korean national team was playing friendly games against Juventus in May 1995 as well as the Korea Cup international tournament.

In Sept. 1995, Kim also attended a Korea national team’s friendly match against Argentine club Boca Juniors, where football legend Diego Maradona was playing his first match after he was banned by FIFA for doping during the 1994 FIFA World Cup.

Kim was the ceremonial kicker in that match along with former Argentina president Carlos Menem.

While TV broadcasters were about to show the winning ceremony, the screen suddenly displayed Kim placing a phone call to congratulate the team and Choi.

But in a live broadcast, Kim delivered a message that is still recalled by many local football fans. He said: “Very good job. You took the corner kick very well.” However, Kim apparently misunderstood “corner kick” with “penalty kick,” which made viewers laugh.

“After beating Japan, we were told the president wanted to contact us by phone,” said former KFA staff Kim Won-dong. “Back then there was not even a cell phone. So after the match, I had to grab Choi’s hand and ran into the broadcasting booth that was on the top of the stadium.”

Choi was exhausted after the game, but couldn’t ignore a call from the president. “I was very nervous and my body was shaking when I heard I was going to have a phone conversation with Kim.”

Before the 1994 FIFA World Cup, Kim invited the men’s national team to the Blue House for lunch. According to Kim Won-dong, who was also attending the event,

President Kim emphasized the importance of a goalkeeper, which put pressure on the team’s main goalkeeper Choi In-young.

Eventually, in the 1994 FIFA World Cup, Korea was eliminated from group stage against Germany, Spain and Bolivia, with two draws and one loss.

“President Kim said that he was a goalkeeper when he was playing football and ordered the team’s goalkeeper to stand up,” Kim said. “He then said to Choi ‘in football, you can’t lose a match unless the goalkeeper surrenders a goal. Your job is very important.’”