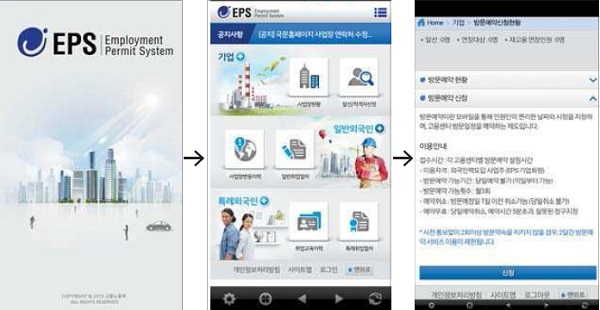 The government launched a mobile application that calculates severance pay for foreign workers in Korea.

The Human Resources and Development Service of Korea, a public institution under the Ministry of Employment and Labor, said on Monday that it jointly developed the app - called the Employment Permit System (EPS) - with Samsung Fire & Marine Insurance, and test operations began on Tuesday.

Test operations will wrap up by the end of this year, and the app officially launches at the beginning of 2016.

The app is part of the employment authority’s efforts to encourage employers to pay foreign workers accurately and fairly.

Many foreign workers working at factories in industrial areas nationwide, both with and without working permits, have complained about employers who cheat them on their salary or severance pay or postpone payments for months or even years.

With the new app, the government hopes to arm foreign workers with a better knowledge of how the payment systems work and how much they can legitimately demand from employers.

The app can be downloaded on the Google App Store. In the test version, it is available in Korean, English, Vietnamese, Cambodian and Indonesian. When the app officially launches in January, it will be available in 10 additional languages.

The government planned the app after the Employment Ministry revised the local employment law last year. The government now has the responsibility of ensuring that all foreign workers receive their employment insurance fees when they leave Korea. Employment insurance reaches maturity when a worker leaves Korea. Many foreign workers don’t receive it because they are ignorant of the system.

In Korea, companies hiring foreigners are required to subscribe to an employment insurance called the departure maturity insurance. The government requires all companies to subscribe to this for each foreign employee in order to ensure all of them leave Korea after the end of a contract. This is called severance pay for foreign workers.

Employers have to pay premiums each month. Before the law was revised last year, if an employer refused or failed to pay the severance pay at the end of contract and no claims were made by employees, the severance pay reverted back to the employer who paid the premiums.

But the revised law guarantees that if a worker leaves without receiving severance, the company has to send it to overseas bank accounts the worker has in his or her home country. The Employment Ministry checks if the workers received it.

The new app allows both employers and employees to calculate the severance pay when the terms of the employment contract are inputted.

“I would advise that both employers and employees sit down together when inputting employment information, like the salary and employment period, to make sure both sides check they use same accurate numbers,” said Kim Pyung-hee, head of the international talent division at the Human Resources and Development Service.

The new app’s launching was a policy pushed by Korean foreigner employment law, which is also called the Employment Permit System. It was first implemented in 2004 to ensure that Korean small and midsize companies hire foreigners with standardized employment contracts and to guarantee employees’ rights.

The government implemented the law to encourage foreign workers working here illegally to come out of the cold and become legal and to enhance working conditions for foreign employees.