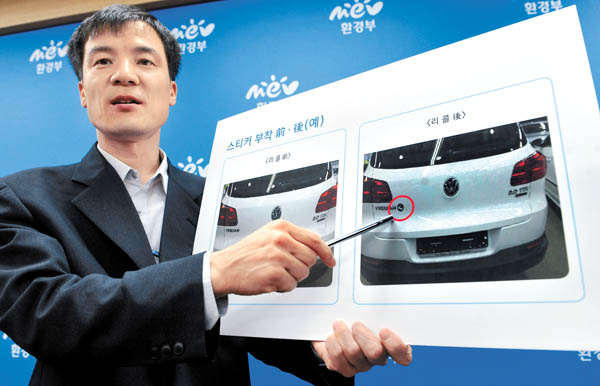 Hong Dong-gon, spokesman for the Ministry of Environment, explains the test results on Volkswagen vehicles in Sejong City on Thursday. The ministry confirmed that the German automaker tampered with its carbon emissions equipment. [KIM SEONG-TAE]

The Ministry of Environment ordered Volkswagen Korea on Thursday to recall a total of 125,522 diesel cars sold in Korea after wrapping up a one-month investigation, saying the amount of emissions discharged by a tested vehicle, a Tiguan SUV, exceeded the standard by 31 times.

The government also fined the German car company 14.2 billion won ($12.3 million), the biggest fine ever charged on an automaker.

Volkswagen Korea said it will start proceedings for the recall as soon as possible.

“We checked six cars of the five Volkswagen diesel models that were sold in Korea,” Hong Dong-gon, a spokesman for the Ministry of Environment, said at a press briefing held in Sejong City. “We found that the emissions reduction device on a Tiguan SUV Euro 5 model equipped with an EA189 engine was deactivated by software, the so-called defeating device, during a road test.”

The ministry said it tested four Euro 6 models - a Volkswagen Golf, Jetta, Beetle and Audi A3 - and two Euro 5 models - Volkswagen Golf and Tiguan SUV - and said it wasn’t able to find the defeating device on all the Euro 6 cars and the Euro 5 Volkswagen Golf, all of which are equipped with a new engine, the EA288.

The Tiguan SUV Euro 5 model was the only car tested equipped with the problematic EA189 engine, which the Volkswagen Group admitted in September had defeating device software installed in its electronic control unit.

The ministry said it will continue to run additional tests on models equipped with the EA288 engine.

The defeat device was meant to deactivate an emissions reduction device during road driving to allow the vehicle greater fuel efficiency. It was programmed not to do that during lab tests.

The ministry ordered Volkswagen Korea to stop selling all cars equipped with the EA189 engine and to recall all 125,522 units already sold in the country. Volkswagen was told to submit a detailed recall plan, including how to improve emissions from the cars in question, to the ministry by Jan. 6.

The government wants all the cars fixed for the sake of air quality. But some customers may not bother because they prefer better fuel efficiency.

“We aim to refit 80 percent of those faked cars, but since this is a recall [that doesn’t legally force owners to make the fix], we are trying to provide measures that encourage the owners to bring their cars to a service center voluntarily,” said Hong from the Ministry of Environment.

The ministry said it will expand its investigation, adding that diesel cars offered by 16 automakers, including Korean brands Hyundai Motor, Kia Motors, GM Korea, Renault Samsung and Ssangyong, as well as other foreign cars such as BMW, Mercedes-Benz, Porsche and Jaguar Land Rover, will be inspected starting next month.

“Since the government’s report has been announced, we will try to provide appropriate measures, which will also include a plan for recalls,” a Volkswagen Korea spokesman said. “It is too early to give exact schedules, but it could be early next year.”

Volkswagen Korea also said it will provide compensation plans for owners. Volkswagen Group’s headquarters said it will give $1,000 gift cards, vouchers and three-year free repair service, known as a “good will package,” to each of the 482,000 owners in North America, but Korea and Europe were excluded from the plan.