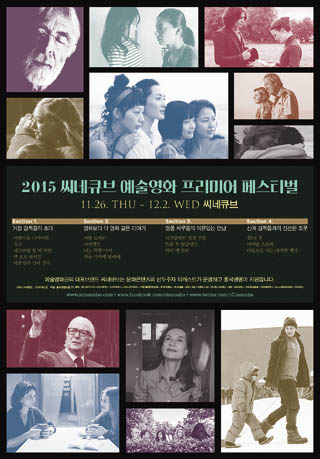 Movie aficionados will have a busy schedule this weekend as two art-house and indie film events got underway on Thursday.

The 41st edition of the Seoul Independent Film Festival, the longest-running event of its kind, began its nine-day run with 110 independent films from Korea and abroad.

The opening slot will be filled by Kwak Min-seung’s short film “Lucky Ball,” which has been noted for expressing well the premature feelings of high schoolers’ first love with the help of melodious background music.

The 22-minute film received financial help from the festival after being selected as the winner of its support program last year.

The event, which runs through Dec. 4, will be held at two venues in Seoul: the Apgujeong branch of CGV Arthouse in southern Seoul and Indie Space in Jongno District, central Seoul.

Another exciting film event coming this weekend is Korea’s major art-house theater Cine Cube’s annual film festival, which introduces art-house films that don’t get the chance to have a wide release in Korea.

Going into its seventh edition, the “Cine Cube Arthouse Film Premiere Festival” will showcase 15 critically acclaimed art-house films from around the world.

The event is also planned to celebrate the theater’s 15th anniversary.

On the last day of the event there will be a special screening event that will replay the favorite film from the festival, as chosen by a vote.

The online vote will offer up 15 candidates, consisting of the three most-watched art-house films for each year of the event, from 2010 to 2014. The options include Michel Gondry’s “Mood Indigo,” Xavier Dolan’s “Mommy” and Abdel Kechiche’s “Blue Is the Warmest Color.”

The film event runs through Wednesday at Cine Cube in Gwanghwamun, central Seoul.