My lesson to Roh on power games

My lesson to Roh on power games 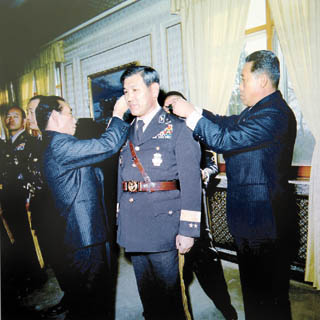 I was returned home after 46 days of interrogation at the security command. As my vehicle approached, I could see a throng of reporters waiting for me on the street. My wife Young-ok and daughter Ye-ri greeted me with tears. From that day, I was put under virtual house arrest with my movements inside the house closely monitored by security officers 24 hours a day.

President Choi Kyu-hah resigned on Aug. 16, 1980 and his position was temporarily filled by Prime Minister Park Choong-hoon. Just days after Choi’s resignation, I got a call from Security Commander Roh Tae-woo, who told me he wanted to meet. Roh was one of the core members of the Chun Doo Hwan Dec. 12, 1979 coup a year to fill the power vacuum created by Park Chung Hee’s death.

After the Dec. 12 coup, Roh was promoted to head of the security command, succeeding Chun Doo Hwan. Roh had effectively rendered President Choi powerless during my 46-day detainment by forming a national security emergency committee. Speculation abounded that Roh was Chun’s right hand man. They both went to the Military Academy together. 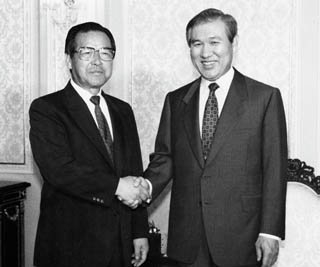 Hours after I got the call from Roh, I met him at his residence at the security command. As I walked in, he bowed his head in apology.

“I apologize to you, sir,” he said. “Things did not have to turn out the way they did. We did things to you that we shouldn’t have. I ask for your forgiveness.” He was apparently apologizing for my 46-day detention and questioning and the Chun group’s branding of me as a corrupt politician. My anger eased somewhat after hearing his apology and feeling the sense of respect in his manner toward me.

“All of this is part of the flow of history,” I replied, “which can’t be reversed by anyone. Since you have gone this far, I hope you lead the nation well.”

“As a senior official, would you give me any advice?” Roh asked. “I will act based on your advice from now on.”

I sensed desperation in his voice.

“Whether you like it or not,” I told him, “you have entered the realm of power. Since you are in it, you need to survive the power struggle by acting prudently. I see you don’t have many people to give you advice. From my perspective, you seem to be the No. 2 guy after Chun. Naturally, the No. 1 man tends to neutralize the No. 2 man to render him powerless. Let me tell you what you should keep in mind: Don’t ever long for the power possessed by your No. 1 man. You shouldn’t look powerless before him, but you do need to bow your head. You can do that with dignity and reason. What is very important is that you need to give him the impression that you will always be there to support him. Don’t ever do anything that could lead to suspicions that you are longing for power. You need to assist your leader until your time comes for power. Even if there are moments when you are falsely accused of something, you just need to get through it, bear it. That is real endurance. I have lived my life with those principals in mind.”

“Thank you Sir,” he said. “Who else could advise me like you did? I will act from now on according to your wisdom.”

My advice to Roh was a direct reflection of my 18 years assisting and supporting President Park Chung Hee after the May 16, 1961 revolution [coup]. In fact, I was a man of ambition in earlier years. In 1962, I flew to Tokyo to negotiate with Japanese Prime Minister Hayato Ikeda to restore diplomatic relations with Tokyo. At that table, I was relentless in arguing Japan’s responsibility for the division of the Korean Peninsula. Watching me make my case with such vigor, Prime Minister Ikeda asked me how old I was. I told him I was 36. He said I reminded him of a Japanese patriot during the Meiji Restoration. Intrigued by his remark, I asked him which patriot. He said Okubo Toshimichi, who helped lay the cornerstone for Japan’s modernization in the 19th century. He was revolutionary by nature. He was also 36 years old when he was at the forefront of dismantling Japan’s feudal system. At age 48, he was assassinated.

But my ambition gradually cooled as time passed and I confronted many challenges and accusations against me over the years. I was forced to flee overseas because of mounting pressure and monitoring of my political activities. In 1968, I had to give up all my official positions because of groundless rumors that I was seeking the presidency.

As President Park cemented his grip on power, his suspicions about my political aspiration grew. Sensing his worries, I was particularly cautious about my behavior. When President Park amended the Constitution in order to run for a third term, I supported him. When he declared the Yushin Constitution years later, I also sided with him. I decided to back him to finish the revolution he and I began despite potential risks. Some said such actions were an indication that I was being tamed. I could hardly deny it.

Those who identified themselves as No. 2 men during the 18-year reign of Park Chung Hee all ended up vanishing. Kim Hyung-wook, former head of the Korea Central Intelligence Agency, Kim Sung-gon, a senior member of the Democratic Republican Party (DRP), Lee Hu-rak, another former spy agency chief and presidential security chief Cha Ji-cheol were among those who met bitter ends.

Acting as the No. 2 man without getting under the skin of No.1 is not an easy task.

I have no way of finding out if Roh truly paid heed to my advice and acted accordingly. But as was shown later, he gradually rose through the ranks during Chun’s seven-year rule to become head of the ruling party.

Chun was elected president on Aug. 27, 1980 by delegates to a National Council for Unification in accordance with the Yushin Constitution, 10 days after President Choi Kyu-hah resigned. Chun’s era lasted until 1987. Over a seven year period, I was out of politics. The DRP was dissolved on Oct. 27, 1980 by the order of Chun’s government and its assets were confiscated. I spent time drawing and painting. The Chun government insisted there would be no commemoration events to remember Park Chung Hee during its reign. I had to bide my time.