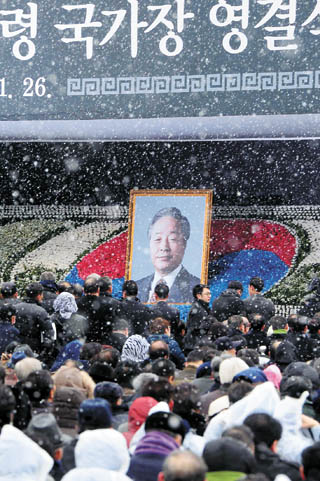 A state funeral for the late President Kim Young-sam is held at the National Assembly on Thursday. [NEWSIS]

The nation saw off former President Kim Young-sam, remembered as the “big mountain” of Korean democratization, in a solemn state funeral held in Seoul on Thursday as the city saw its first flurry of snow this winter.

An outdoor state funeral ceremony was held at the National Assembly plaza to pay a last tribute to Kim before the late president, who left behind a last message of “unity and reconciliation,” was taken to his final resting place at Seoul National Cemetery.

Over 35,000 people visited Kim’s funeral altar at Seoul National University Hospital, where he died from a severe blood infection and acute heart failure at the age of 87.

More than 162,000 people paid respects to the late president at 221 memorial altars for Kim set up nationwide over the five-day mourning period, according to the Ministry of Interior.

Kim served as the first elected civilian president of Korea from 1993 to 1998 following decades of military rule.

At around 1 p.m., the coffin, draped in the Korean flag, was ceremoniously carried by honor guards to a black Lincoln hearse adorned with white chrysanthemums to begin the procession towards the National Assembly.

Amid speculation over whether President Park Geun-hye would attend the state funeral ceremony despite poor health, the leader made a surprise appearance at Seoul National University Hospital in Jongno District, central Seoul, as Kim Young-sam’s hearse departed.

Park visited Kim’s funeral altar earlier this week, right after returning from a trip to Malaysia on Monday.

She took the hand of second son Kim Hyun-chul and offered her condolences, and the younger Kim expressed his thanks on behalf of the family.

As it snows, bereaved relatives and dignitaries attend the funeral for the late President Kim Young-sam at the National Assembly on Thursday. [JOINT PRESS CORPS]

Her head was slightly lowered as she watched the funeral procession leave for downtown.

Park initially planned on attending the funeral ceremony at the National Assembly, but could not attend due to poor health. Her physician advised Park, who is suffering from a cold and fatigue, against outdoor activities, according to the Blue House. She will head to Paris on Sunday for a global climate summit. It is a seven-day trip. Park also canceled a congratulatory address at the opening ceremony of the Creative Economy Expo on Thursday.

The hearse, accompanied by a vehicle displaying Kim’s portrait, buses carrying bereaved relatives, a motorcade and police cars passed through major roads in Seoul. Traffic was regulated to let the procession pass. The vehicles passed through Sejong-daero, Gwanghwamun, by the Blue House that Kim occupied for five years and Mapo District.

Mapo District in northwestern Seoul held a special place in Kim’s heart, as it was home to the headquarters of the main opposition party in the 1970s when he served as chairman of the New Democratic Party. The procession then crossed Mapo Bridge over the Han River to Yeouido in southwestern Seoul, home of the National Assembly.

Some 7,000 people attended the ceremony, including rival and allied politicians, foreign dignitaries, religious groups and members of Kim’s funeral committee.

The attendees braved subzero temperatures, wrapped in blankets and decked out in hats and scarves, during the 80-minute ceremony, as snowflakes fell from an overcast sky.

“We are here today to bid a final farewell to former President Kim Young-sam, who was a huge mountain that oversaw our country’s democratization,” Prime Minister Hwang Kyo-ahn said at the ceremony. “After being elected as our youngest-ever National Assembly representative, as nine-term lawmaker and a party leader, he contributed greatly to the progress of the parliament. He has also left behind many achievements that have advanced our nation as our 14th president.”

Kim was behind bold reforms such as an anticorruption campaign that cracked down on secret bank accounts and disbanding the Hanahoe, or Group of One, a fraternity of elite military officers headed by Chun Doo Hwan. His administration was caught up in the 1994 North Korean nuclear crisis and the Asian financial crisis in 1997, which nearly leveled the Korean economy and forced the country to ask for a massive bailout with harsh conditions from the International Monetary Fund. 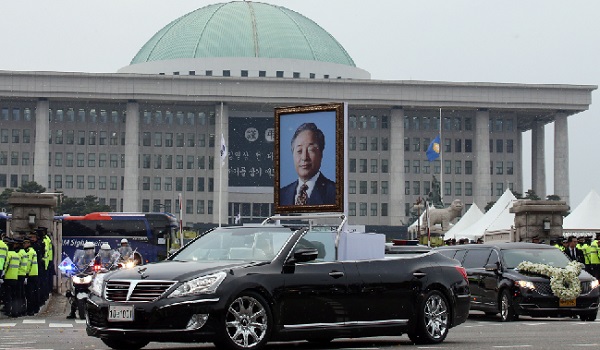 After the funeral service at the National Assembly, the cortege moves toward the residence of the late President Kim Youngsam

However, Kim is also recalled by ordinary people for his love of jogging and kalguksu (hand-cut noodles in broth) and for his simple and modest tastes despite coming from a wealthy fishing family in Geoje Island.

Around 10,000 people were invited to the funeral ceremony, though some people did not make it because of the cold.

This was less than the 24,000 people that attended former President Kim Dae-jung’s funeral in 2009.

It reflected Kim Young-sam’s family’s wishes that they wanted to have a more modest and simple funeral.

The Ministry of Interior created a 2,222-member state funeral organizing committee that was chaired by Prime Minister Hwang Kyo-ahn. It included some 300 founding members of the Council for the Promotion of Democracy, which was established in 1984 to fight the authoritarian rule of former President Chun Doo Hwan.

This is the first state funeral since the government revised the law on official funerals in 2011.

A eulogy was delivered by former National Assembly Speaker Kim Soo-han, head of the Kim Young-sam Center for Democracy, an organization founded in 2010 and dedicated to disseminating information on modern history and democracy.

“The National Assembly, the hall of the public, is a place where the [late] president’s breath is imbued everywhere,” said the former parliamentary speaker, who was part of the so-called Sangdo-dong faction led by Kim Young-sam and a longtime friend. “The mentality that he will not give up the National Assembly in any situation, his respect for the parliament, is still alive.

“His cry of ‘the dawn still comes even if the rooster is strangled’ reached the frustrated and dejected people of this country,” he continued, “and sparked the desire for democracy in their hearts and became an unfading ember of hope.” Kim Young-sam made that remark in 1979 when he was expelled from the National Assembly by pro-dictator lawmakers.

In 1954, Kim became the youngest lawmaker in Korean history at the age of 25 and then went on to become the youngest chairman of the New Democratic Party, which opposed then-President Park Chung Hee’s Yushin Constitution and dictatorship.

A native of Geoje in South Gyeongsang, the late president was a nine-term lawmaker and served as a party chief five times.

Kim Soo-han concluded, “Lastly, at this time where we bid farewell to the president, on behalf of all the people of the nation who love democracy, I would like to say: ‘You have worked very, very hard. Thank you, thank you very much.’”

The eulogy was followed by religious rituals conducted by Protestant, Buddhist, Catholic and Won Buddhist leaders in memory of the late president.

Incense was burned as his immediate family members and key political figures offered flowers at an altar next to his portrait and the medal he received upon ending his five-year presidency.

His wife, Son Myung-soon, pushed in a wheelchair, offered a chrysanthemum, followed by his two sons and three daughters.

Former President Lee Myung-bak was the only former president at the ceremony.

Former President Chun Doo Hwan, who paid condolences at Kim’s funeral altar at Seoul National University Hospital on Wednesday, was not there. Former President Roh Tae-woo, who also has been suffering from poor health, did not attend.

The leaders of the main and opposition parties, Saenuri Chairman Kim Moo-sung and New Politics Alliance for Democracy Chairman Moon Jae-in, were seated side by side.

Baritone Ko Sung-hyun, a Hanyang University professor, accompanied by a children’s choir, sang Kim’s favorite song, “I’d Like to Live on a Green Mountain” to close the ceremony at the National Assembly along with a 21-gun salute.

The procession, however, stopped by his long-time Sangdo-dong residence, also in the same district.

It was his home for 46 years, his base during the fight for democracy, where he conducted his 23-day hunger strike. It became a stronghold for political discussions with his loyalists.

Hundreds of residents of the neighborhood braved the cold to line up along the long street leading to his house to see off the former president.

The procession passed a memorial library, a five-minute walking distance away from his house, dedicated to the former president. It had been expected to open in June but was delayed and is set to open next March. Kim had said he wanted to go back and forth from this library every day, one of his last wishes.

Around 250 people attended the burial at Seoul National Cemetery as the sun rapidly sank.

As a pitch black sank over the burial ground, Kim was buried about 300 meters (980 feet) southeast of his longtime political rival Kim Dae-jung, another one of the “Three Kims” who dominated modern Korean politics.

His widow watched on, expressionless. The late president has described his greatest accomplishments in life as marrying his wife and helping Korea achieve democratization. He married Son in 1951, when she was a junior at Ewha Womans University. His widow struggled to stand from her wheelchair, braced by guards, as her husband of over 60 years was buried.

Her eyes did not leave the coffin as the man who was called the “Big Star of Democratization” found his final resting place.