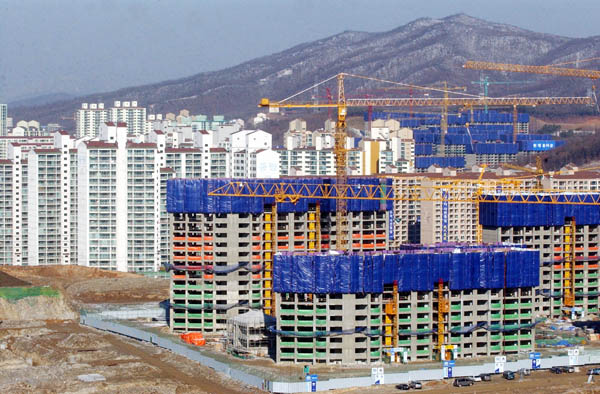 Some investors fear an oversupply of apartments could drive the Korean real estate market into another recession in 2017.

According to data by the Ministry of Land, Infrastructure and Transport, the total number of residences of all types being built stood at 604,340 as of October, up 52.3 percent from the same period last year.

That total is expected to exceed 700,000 by the end of year for the first time since 1990, when Bundang and Ilsan in Gyeonggi were established.

The approved construction allows residents to move in two or three years later. That is why some investors are concerned about a looming oversupply in 2017. 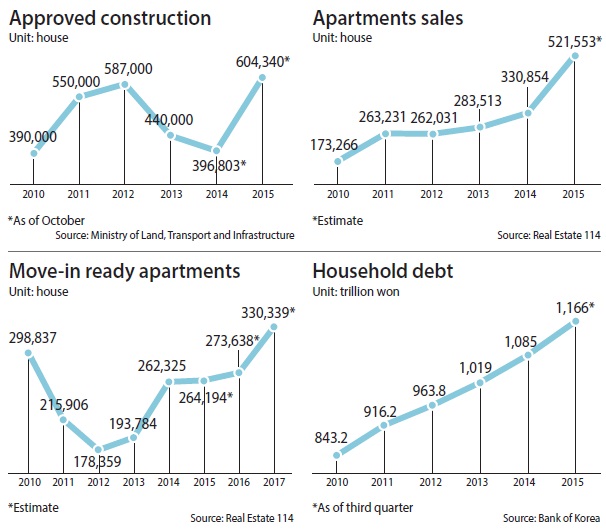 “This autumn alone, there is already a growing number of unsold or empty apartments in some districts in Yongin, Gyeonggi,” a property agency official said. “New apartments in Sanghyeon-dong, Dongcheon-dong and Seongbok-dong, known as Suji District, have been completed, showing quite a huge popularity, but we can’t say the trend is going to continue next year. Construction companies are hastily selling their apartments in order to build new ones.”

Counting apartments alone, a total of 420,024 units were built and sold from January through October, up 47.5 percent from the same period last year.

Real Estate 114, a property information provider, forecasts the total supply of apartments will reach 510,000 by the end of the year.

Concerns are mounting that as the number of new house construction rises, the volume of available houses might surge at one time, causing prices to fall due to comparatively lower demand.

Such an imbalance of supply and demand in the real estate market can spill into the financial market if the number of investors who borrowed money for new apartments can’t find tenants, which can spread into the real economy.

“There could be problems if homeowners can’t find tenants when the supply of new apartments spikes after 2017,” said Kwon Dae-jung, professor at Myongji University. “A number of empty apartments can be left out in the market, where investors will make no extra money if they bought them with loans.”

But some say it is too early to worry about oversupply.

“From 2008 to 2013, the housing supply was short of demand,” said Sohn Jae-young, professor at Konkuk University. “The recent increase in approved construction does not directly develop into oversupply problems.”

Some in the housing market say it is difficult to expand supply further due to lack of land.

“Amid low interest rates and increasing conversion from jeonse [lump-sum deposit rent] to wolse [monthly rent], demand for new houses surged, leading to higher supply,” said Kim Ui-yeol, director at the Korea Housing Association. “But there is no room to increase supply anymore because there is not enough land.”

Some observers say there is no need for immediate concern, but if the current trend continues next year, oversupply concerns are reasonable.

“Next year, if the government approves as much as it did this year, oversupply can be materialized,” said Ham Young-jin, head of research at Real Estate 114. “In provincial areas, supply growth is expected to slow, but there are stacks of approved but unsold houses in the Seoul metropolitan area.”

The Land Ministry says it will closely monitor the housing market.

“There are signs of oversupply in some areas, which the ministry will watch to not trigger any problems,” Land Minister Kang Ho-in said at a press conference on Nov. 16.

The ministry is more worried about pouring cold water onto the real estate market that is finally showing signs of recovery than the looming oversupply problems.

“The market will get more stabilized when the financial authority starts tightening loan regulations next year,” said Kim Jae-jeong, director at the Land Ministry.

A 40-year-old salaryman surnamed Park, who lives in Bundang, lately visited a bank to get mortgages several months ahead of expiration of his jeonse rented house.

Park was mulling whether he would extend the current jeonse contract or buy a property on his own. He finally made a decision to purchase a 500 million won ($430,000) apartment with the help of a 140 million won mortgage with a fixed rate of nearly 3 percent for five years.

“I heard that getting mortgages will be more difficult next year, and interest rates are expected to rise,” Park said. “This would be the last chance to buy a house.”

There are a rising number of people buying houses with mortgages like Park. More people are thinking of getting financial help from banks this year as the government announced stricter loan regulations starting next year. The financial authority said it will strictly restrict loans to those who are able to repay both the original money and interests starting in January.

“The current spike in mortgage issuances is the result of a combination of the busy housing market, low interest rates and loosened loan regulations,” said Kim Ji-seob, research fellow at the Korea Development Institute. “As the regulation is expected to be tighter next year, people are hurrying to buy houses within this year.”

Those who have plans to purchase a house next year should make their purchase plans before the tightening, Kim said.

Some forecast the aggregate household debt will surpass 1,200 trillion won if the current pace continues until the end of the year.

The Bank of Korea data showed that commercial banks issued a total of 624 trillion won worth of loans to households as of October, up 9 trillion won from September, showing the highest monthly increase since 2008. Of the total, mortgages accounted for 465 trillion won.

The Financial Supervisory Service began investigating collective loans issued by banks over concerns that the housing market is overheating. Collective loans are issued to a group of tenants who are planning to move into new apartments. Those with low credit rates can get loans of up to 70 percent of the house prices. As of September, 104.6 trillion won was loaned as collective loans, up 3.1 trillion won from late last year.

In the second-tier financial market, issuances of household loans are also growing fast. Non-bank financial institutions such as MG Community Credit Cooperatives issued a total of 239 trillion won in loans in the third quarter. Those institutions loaned money at higher interest rates to those with lower credit levels. When the benchmark interest rate climbs, it will cause a heavier burden on repayments.

“Mortgages can cause problems when the U.S. Federal Reserve raises its interest rate, affecting conditions in the Korean financial and property markets,” said Yim Jin, research fellow at the Korea Institute of Finance. “Comprehensive measures to adjust demand for loans, purchases of land by construction companies and government approval are needed.”

Compared to the first half of this year, the overall growth in home prices has been slower in the latter half, but apartment prices are still showing continuous growth.

In the Seoul metropolitan areas, apartment prices have risen for the 15th consecutive month since July 2014. In provincial areas, they are on the rise for the 33rd straight month since January 2013.

According to a survey by KB Kookmin Bank, apartment prices in Seoul jumped 5.2 percent as of early November. In areas near Seoul, the prices climbed 5.3 percent on average. In the five metropolitan cities, such as Daegu and Busan, prices surged 6.03 percent. In other provincial areas, prices inched up 2.07 percent.

A 35-square meter (377-square foot) apartment in Gaepo-dong in Gangnam District was sold at 683 million won lately. The price of this apartment surpassed the previous record of 680 million won in 2008.

In the northern part of Seoul, Seongbuk District had the highest growth in apartment prices. An 84-square meter apartment in Gileum-dong is now offered at 510 million to 530 million won.

The reason for the price hikes stems from increased demand.

“As jeonse prices soar, more and more people are now turning to buying with a mortgage rather than extending their jeonse contracts,” said Lee Nam-soo, head of the real estate team at Shinhan Investment Corporation. “As real demand rises, home prices have picked up.”

However, experts remain divided over whether the price hike trend will continue to next year. Some say stricter government regulations on loans and concerns about oversupply will curb the price growth.

“Worries about interest rate hikes and oversupply would serve as a burden for the market, slowing the price increases,” said Heo Yun-kyung, research fellow at the Construction and Economy Research Institute of Korea.

Some others expect the rising trend to continue until the first half of next year if jeonse prices remain as high as this year.

“The shortage in available jeonse houses and an imbalance of supply and demand will keep housing prices rising further for the time being,” said Park Hab-soo, a Kookmin Bank private banking center executive. “But the hikes will not be as high as this year because prices have already soared enough.”