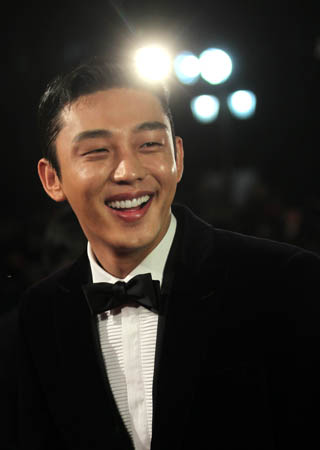 The espionage film “Assassination,” directed by Choi Dong-hun, received the top honor at the Blue Dragon Film Awards, which were held at the Hall of Peace at Kyung Hee University, Hoegi-dong, Dongdaemun District, central Seoul, on Thursday night.

“Assassination,” set in 1933 and featuring a stellar cast including Ha Jung-woo and Jun Ji-hyun, was released in July and has attracted more than 10 million moviegoers.

The awards for Best Actor and Best Actress went to Yoo Ah-in (shown in photo) of the historical film “The Throne” and Lee Jung-hyun of “Alice in Earnestland,” respectively.

“I promise I will keep evolving as an actor,” Yoo said during his acceptance speech.

It was a prolific year for Yoo because his other action flick, “Veteran,” was released in August and attracted more than 10 million moviegoers.

Lee of “Alice in Earnestland” burst into tears as she made her acceptance speech. “I didn’t expect to receive an award because it was a low-budget film,” she said.

“Alice in Earnestland” is a black comedy that traces the life of a working-class housewife who struggles to pay off her debts.

Lee, who debuted as an actress in 1996 but later became a big-name singer in the early 2000s, received numerous awards when she performed as a singer, but this was her second film award since her acting debut.

The Blue Dragon Film Awards are one of the country’s longest-running annual film awards. It was launched in 1963.