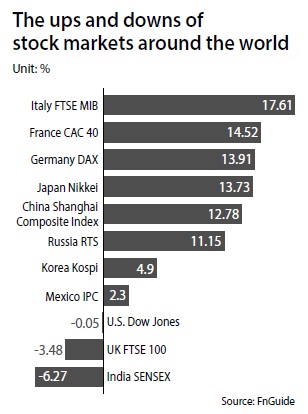 Investors may feel as though the Seoul main bourse has been stuck in everlasting limbo in recent months, but compared to other global markets, Korea didn’t do too bad this year, a study reveals.

According to financial information provider FnGuide on Friday, Korea ranked seventh among 20 global stock markets when it came to growth compared to the end of last year.

The Seoul main bourse as of Wednesday grew 4.9 percent compared to the end of last year. In fact, this year’s market has been doing better than last year and is ranked 19th, after it declined 4.8 percent.

“As the Kopsi [in 2013 and 2014] has been struggling, the valuation merit [of Korean stocks] has gone up this year,” Yuanta Securities analyst Kim Kwang-hyun said. “As a result, when other stock markets tumbled, the Kospi’s decline wasn’t as sharp.”

This year, Italy’s stock market saw the sharpest growth as the FTSE MIB surged nearly 18 percent from the end of last year. Other European markets, including France’s CAC and Germany’s DAX, also grew around 14 percent largely thanks to the depreciation of the euro against the greenback. The Tokyo market also grew, adding 13.7 percent on the back of the weakened Japanese yen.

The Russian market was up more than 10 percent as well so far this year.

The Chinese Shanghai composite index also saw a sharp growth of 12.78 percent, largely thanks to higher access to foreign investors.

However, unlike Shanghai, Hong Kong reported the worst decline among the 20 markets, as it tumbled 15.5 percent.