Technology offers smart way to pay all your bills

Technology offers smart way to pay all your bills 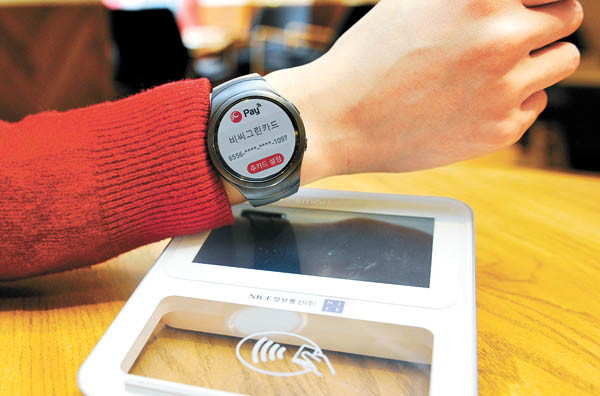 BC Card’s BC Pay that works with the Samsung Gear S2. [BC CARD]

In what has become a common sight in restaurants and stores across Seoul, Mr. Ahn, an office worker, was about to pay for dinner at a family restaurant in Gangnam District’s Garosugil.

Instead of reaching into his pocket for his wallet, the 38-year-old simply scanned the mobile app CLiP on his smartphone. The app automatically searched for the best membership card that would help him get the largest discount on his bill and then paid the bill.

“Thanks to my smart devices, I can get discounts on my payments in a single move,” Ahn said. “It’s become really convenient since I don’t have to carry a wallet.”

The app is making the once ubiquitous piece of flat plastic obsolete. Payment systems are now incorporated into smart devices, thanks to the wide use of smartphones and rapid development of Internet of Things and wearable device technologies.

“Payments made by credit cards today account for more than 60 percent of all spending made by individual consumers,” said Lee Hyo-chan, head of the Credit Finance Association’s research center.

“And recently, more people are making payments on smart devices. Plastic credit card demand will further shrink in the future thanks to wearable devices, including clothes, that will also have the function of payment.”

Thanks to the convenient payment system, subscribers to Samsung Pay have exceeded one million. Samsung Electronics isn’t the only company that is jumping on the latest payment technology system. BC Card became the first in the local market to allow NFC payments via a smartwatch. Subscribers to BC Pay can make their payments after downloading the credit card app on their smartphone connected to Samsung’s Gear S2 smartwatch. 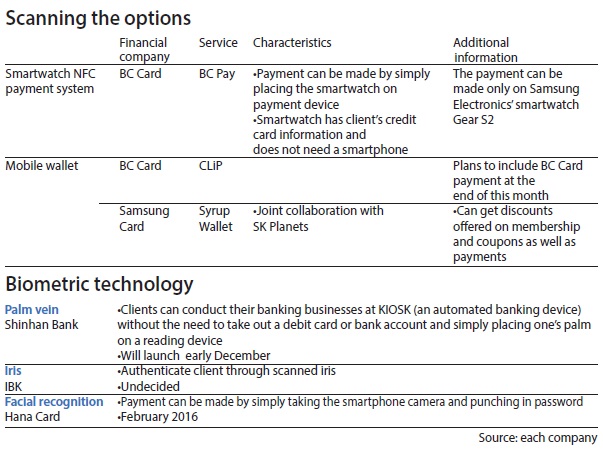 Previously, those who tried to access their mobile payment system via a smartphone had to open up an app and then punch in a six-digit password that then displayed the user’s credit card barcode. The payment would be made by placing the barcode on a scanner. BC Pay reduces the process by simply placing the smartwatch directly onto a scanner. The payment is processed in a second. 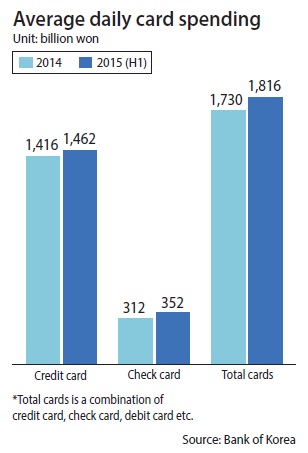 “The user doesn’t even have to carry his or her smartphone when they want to make the payment, as the smartwatch has a security chip with the person’s credit card information that has been input via a smartphone,” said Choi Jeong-hoon, head of BC Card’s convergence business department.

Today, one of the biggest changes is that more consumers are now downloading mobile “wallets” like CLiP that not only have the various benefits of a subscribed credit card but also numerous other membership cards. People don’t have to shuffle through their credit cards and membership cards to get discounts when paying for dinner or getting a coffee at a nearby Starbucks.

In August, Samsung Card started a service where subscribers can make payments via the most popular wallet app, Syrup, which was developed by SK Planet and has roughly 15 million users.

Around the same time, BC Card joined hands with KT to launch CLiP, which has information on discounts of goods and services provided by the wide range of credit cards and debit cards.

By the end of this month, BC Card and KT plan to add a feature where users can make payments via BC Cards on CLiP.

Meanwhile, some financial companies are adopting biometric technology for financial services that will allow clients to do business, including withdrawing cash from ATMs, using their own physical features such as the vein on their hands.

Shinhan Bank next month is planning to introduce a sensor that will recognize a person’s identity from the vein in their hands. This is considered faster and more accurate than the fingerprint authentication system.

The bank plans to adopt the authentication system on KIOSK, which will allow clients to conduct their banking business without having to carry their bank account or debit card.

“The iris is the most complex and elaborate part of the human body, and the iris pattern is different for every person,” an IBK official said. “We are considering applying this security technology in our ATMs and safe deposit boxes.”

Among credit card companies, Hana Card is the most aggressive in adopting a biometric security system. It plans to be the first in the industry to use a facial recognition system in February next year.

Clients of Hana Card will be able to make their payments, whether online or in stores that accept Hana Card, by placing their face in front of a camera and then punching in their password.

“The verification system using the client’s body information is the most secure authentication system,” said Hong Pil-tae, who heads Hana Card’s future business department. “We are planning to introduce other biometric technology-incorporated services, including fingerprint authentication and voice recognition, in the first half of next year.”

Kim Moon-tae, a researcher at the Hana Institute of Finance, said one of the key strengths of biometric technology is the very low possibility of a client’s personal information being leaked.

“But because of the cost in setting up the database, it will take a certain amount of time before it will settle as a popular financial transaction system,” Kim said.